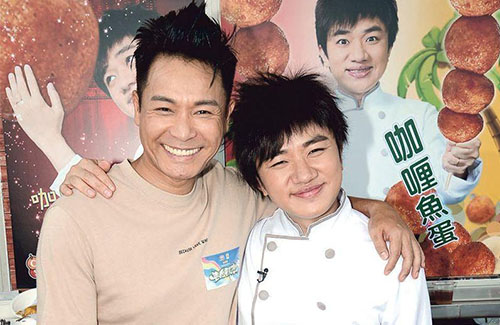 The cast of Oh My Grad <老表，畢業喇！> showed up in Central yesterday to promote the show, a comedy serial set in the backdrop of a Hong Kong tertiary education institute. The show—the third installment to the Inbound Troubles <老表> series, stars Roger Kwok (郭晉安), Ada Choi (蔡少芬), and Wong Cho-lam (王祖藍).

At the event, the cast passed out curry fish balls while Wong Cho-lam sang to Jinny Ng’s (吳若希) “Love is Not Easy” <越難越愛>, but changed the lyrics to “curry fish balls” instead. The actor-writer told fans that Oh My Grad has already surpassed 2 million views online, and also thanked Jinny Ng for lending him her song to butcher.

After his marriage to Leanne Li (李亞男) in 2015, Wong Cho-lam turned his career focus to Mainland China. Despite finding success there, it wasn’t the most ideal arrangement.

“I had to film a drama in Hengdian, so in the three months after our marriage, I wasn’t around,” said Cho-lam. “Her parent were in Canada and I wasn’t in Hong Kong. That’s why she got a bit depressed, and would cry every once in a while. That’s why I stopped accepting longer jobs [in China]. I also reduced my screen time in Oh My Grad so I can spend more time at home with my wife. She’s much better now, of course.”

Cho-lam said he hopes more men would treat this as a lesson. “Don’t forget about your family when you’re working,” he said. “Nowadays I would take a few nights off to spend time with her, do leisurely things together like a family.” (What about kids?) “We’ll start worrying about that next year. I’m currently working on a film and a new drama. Need to plan a schedule out.”

Roger Kwok to Film “Threshold of an Era” Sequel in Prague

Roger Kwok said he has been watching Oh My Grad himself, and plans to watch it again with his kids once they get off for break. As for criticism about Oh My Grad being not as funny as its previous installment, he said, “I think the viewers should take their time in watching the drama. It’s true that it’s not as crazy, but it’s more relatable and the feel of it is a bit different from the previous two.” As for why Ada Choi has been absent for promotions, Roger joked, “She’s eaten too many curry fish balls.”

Asking if working on the show has been nostalgic, he said, “It’s a different story this time. It’s been nearly 20 years since we last filmed it. Everything has changed.”