Chinese actor Leo Wu Lei (吳磊) maintains his fit physique through his passion for cycling. The Long Ballad <长歌行> star decided to challenge himself with his first long distance cycling trip of 55 miles in Fujian. In a vlog chronicling his two-day adventure, Wu Lei’s  athleticism is an admirable sight as he shares details of a trip which brought him a lot of personal happiness. 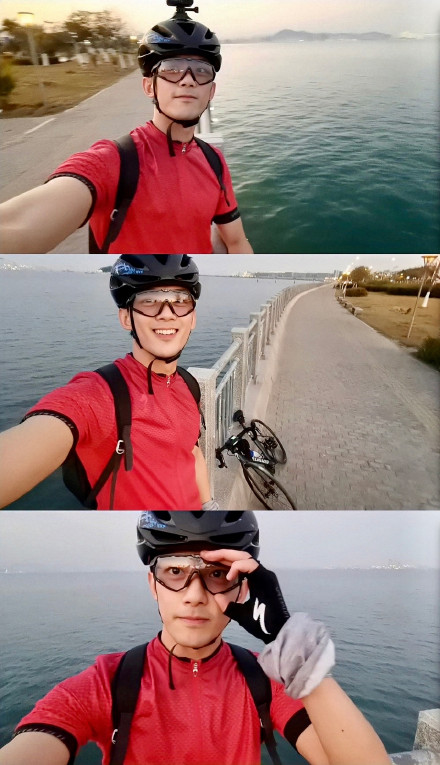 Cycling from Quanzhou to Xiamen, Wu Lei’s enthusiasm is infectious as he “conquers road after road.” He loves the sense of freedom in being outside with just his bike, and especially enjoys riding on the streets at night. Spontaneously picking a nearby hotel to stay at when he grows tired, Wu Lei then panics more than once when he realizes there is “nothing to eat” nearby.

The recording also displayed many humorous situations that occurred on his trip, and fans found amusement when people on the streets did not even recognize the 21-year-old actor. When Wu Lei crossed paths with a fellow cyclist by the seawall who asked if he could take a photo of him, the man was too busy checking out the bike, and did not even register that a huge celebrity was standing right in front of him.

It was only afterwards when he watched the vlog did he realize it was Wu Lei. While it is a typical reaction to express shame and regret in missing the chance to interact with a celebrity, the cyclist instead joked, “Hey little brother, I was too focused on your flashy bike that I didn’t even recognize you. Sorry, but I would like to ask how much you would sell the bike for me?”

Fans were further amused when Wu Lei replied, “Big brother, did you watch The Long Ballad?” Clearly, they were not on the same page as the cyclist only had eyes for the bike while Wu Lei was trying to promote his drama.

In the vlog, it was entertaining to see Wu Lei constantly befuddled throughout his journey but always maintaining positivity. For instance, he was following the navigation but somehow still lost his way and rode to a stranger’s house. In another incident, he stopped by a restaurant to order a plate of vegetables, but was dumbfounded to be served a pot of it instead.