Two of China’s biggest television stars are always being pitted against each other, and it’s not hard to see why.

One of the most recent viral hits in China is a fan-filmed video of Yang Mi (杨幂) attending a brand event. Fan videos of such are common, but what got the video to become a viral hit wasn’t the content, but the fan filming it, and the actress herself—the actress in the video was not Yang Mi, but Zhao Liying (赵丽颖).

In the video, the fan screamed Yang Mi’s name, and even titled the video as “Yang Mi in Lanzhou.” In fact, the actress wasn’t Yang Mi at all, but Zhao Liying.

Yang Mi and Zhao Liying are two of China’s highest-paid actors. Their dramas pull in billions of hits online and off-line. While Yang Mi, 34, started her career before Liying, 32, both actresses experienced similar roads to success, and both started to get popular at around the same time—specifically in 2011, when Yang Mi was fresh off from the popularity of Palace <宫> and Liying from New My Fair Princess <新还珠格格>. Both Yang Mi and Zhao Liying are also known for their performances in popular historical Chinese fantasy dramas.

That short clip single-handedly caused huge fan wars between the fandoms of Yang Mi and Liying.

In fact, that clip wasn’t the first time people got the two actresses mixed up. Years ago, Liying was mistaken for being Yang Mi at one of her drama sets, causing Liying to express her disappointment about this issue online. “Why are fans always mistaking me as Yang Mi?” she wrote on Weibo. 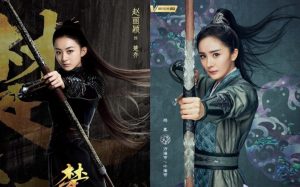 Their similarities are beyond just similar facial features. Liying recently released a photoshoot that really resembled a shoot that Yang Mi did a while back. They own the same neon-colored handbag, and a poster from Yang Mi’s Novoland: Pearl Eclipse <斛珠夫人> was said to be copied from a poster for Liying’s Princess Agents <楚乔传>.

Who started what? Only they would know.