With Yang Mi (楊冪) and Xu Kai’s (許凱) latest drama She and Her Perfect Husband <愛的二八定律> shelved indefinitely, word that her other completed drama Thank You, Doctor <謝謝你醫生> will be aired in November instead is bringing relief to fans! 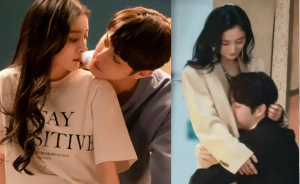 Originally scheduled for an October 13 premiere, celebrity friends of the star including Huang Xiaoming (黃曉明) have all chipped in to repost about the drama, pushing up already high anticipation for She and Her Perfect Husband as Yang Mi has not had any dramas airing this year.

Revealed in the teaser trailer, intimate scenes including one where Xu Kai ‘buried’ his head in Yang Mi’s chest also fueled buzz surrounding the drama. Just two days before its release, the production team announced that it has been indefinitely delayed due to “technical reasons”, which prompted fans to speculate that its “marriage-before-love” theme stepped on censorship toes.

Just as the drama’s premiere appeared stuck in limbo, news sources revealed that Yang Mi and actor Johnny Bai Yu’s (白宇) drama Thank You, Doctor has been scheduled for release come November 4th on CCTV Channel 8, prompting related hashtag to trend on Weibo with 100 million hits and discussions in less than 24 hours. Commencing filming in November 2019, Thank You Doctor also encountered a 500-day filming disruption due to the pandemic, and finally resumed filming only in September 2021.