Mainland director-producer Yu Zheng (于正) successfully launched the careers of many artistes and turned them into household names, including Yang Mi (楊冪), Zhao Liying (趙麗穎), and Wu Jinyan (吴谨言). Yu Zheng, who has always been daring, often criticizes actors on Weibo, counter fan criticism, and sometimes publicly defend artistes. Recently, he talked about his relationship with artistes on the Mainland program, Only Three Days <僅三天可見> and exposed an actress he propelled into stardom laughed at him ruthlessly, making him feel very hurt.

On the show, he expressed he regards artistes and partners as his family members. “I consider celebrities as other people’s family members or my own family members. I am looking at each artiste with a fatherly mentality, so I am more tolerant of them than other colleagues. In return, I hope they will carry some love and respect for me.”

Yu Zheng admits he avoids asking stars he collaborated with to help promote his projects. However, he revealed he was once deeply hurt by two actresses who became famous because of him. Once, he asked one of the actresses to help him promote his work, but the other party rejected him in a roundabout way.

Another time, Yu Zheng found out an actress laughed at him in a WeChat group message. Someone sent Yu Zheng the screenshot, and it wasn’t only until this year that the other party apologized to him over WeChat.

Although many people think Yu Zheng boasts shamelessly because he once said, “I am the best screenwriter in China,” and his actions can be controversial, but he has indeed unleashed the potential of many stars over the years. Hence, after the episode aired, netizens were eager to know who Yu Zheng was talking about.

Beauty’s Rival in Palace <美人心計> actress Yang Mi, The Palace <宮鎖沉香> actress Li Ying (趙麗穎), and Palace <宮鎖心玉> actress Tong Liya (佟麗婭) were believed to be the actresses because they only played supporting roles in Yu Zheng’s dramas. However, fans soon clarified for their idols. Yang Mi and Liying both made promotional films for Yu Zheng’s show Real Actor <演技派> and Liya did not rely on Yu Zheng to get famous because she became popular after starring in Beijing Love Story <北京愛情故事>.

Meanwhile, some netizens think Yu Zheng is just creating hype, but Yu Zheng said, “The reason I’m not saying the name is very simple; I don’t want to increase the damage. And afterward, I thought about it, who doesn’t ridicule others especially at their lowest point? Because of this, I like to provide help when people most need it, to make something perfect even more perfect. On the contrary, the person who sent me the screenshot is even more abominable, right?” 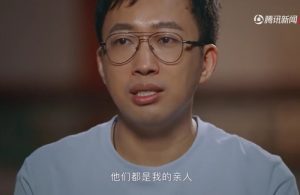