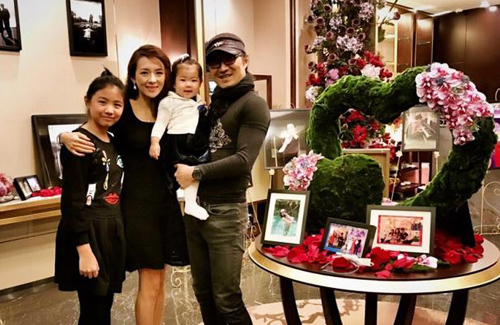 Despite Wang Feng’s (汪峰) messy relationship with Chinese model Ge Huijie (葛荟婕), the 45-year-old rock musician successfully won the heart of Zhang Ziyi (章子怡). After a surprise proposal on the actress’ 36th birthday in 2015, the couple got married and welcomed a baby girl, whom they named Wang Xingxing (汪醒醒). The last two years have been full of memorable milestones for Ziyi, who is enjoying her new role as a mother.

Wang Feng’s daughter from his previous relationship with Ge Huijie got along well with Ziyi. The family of four recently celebrated Xingxing’s one-year-old birthday in January, as well as Ziyi’s 38th birthday on February 9.

Filled with joy and contentment, Ziyi shared a family photo on Weibo and blissfully expressed, “My heart only feels at peace when there is family. When my heart is at peace, everything becomes clear. A very happy birthday today. Thank you.” Several minutes later, Wang Feng responded to Zhang Ziyi’s post and wrote, “Having you and having the warmth of a family is enough! From experiencing years of wandering, your guys’ laughter now is a complete shift. Happy birthday, wife!”

Wang Feng proved to his romantic side once again when he gave a heart full of red roses for Ziyi on Valentine’s Day. But a mother’s love is the greatest, as Ziyi was swayed by her daughter’s first steps more than her husband’s romantic gestures. Taking photos of Xingxing carefully walking, Ziyi wrote, “The most unforgettable memory this Valentine’s Day is baby walking.”