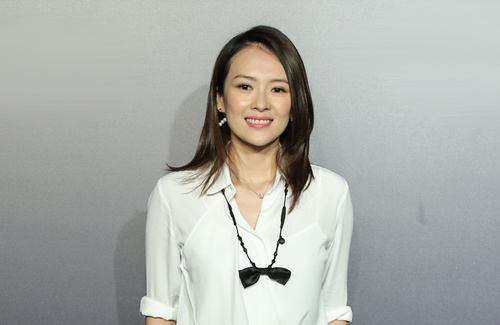 After taking a five-month break from work during her pregnancy, Zhang Ziyi (章子怡) is prepared to make her return to the entertainment industry now that her daughter has reached the one-month-old mark.

On January 27, Zhang Ziyi and husband Wang Feng (汪峰) celebrated their daughter’s one-month-old birthday. Both are accustomed to treating their daughter like a princess and showed off various cakes and cookies, including a pink cake decorated with frosted baby clothes and shoes. The cake proudly proclaims “I’m 1 month old.”

Zhang Ziyi also posted a photo of their daughter’s legs and feet on her Sina Weibo account. She included the message, “Hello, friends of Mom and Dad. I am your little friend, Xing Xing. Today, I am one month old! I’ve been playing the whole afternoon, and now I’m going to sleep. Bye-bye.”

Just a few minutes afterward, Wang Feng responded to the message by writing “Xing Xing” and adding a heart emoticon. Zhang Ziyi to Star in and Produce Comedy Film “East/West”

Because of her pregnancy, Zhang Ziyi drastically cut down on the amount of work she accepted. Apart from filming Oh My God <從天兒降> at the beginning of last year and appearing in one of her husband’s music videos, she has not accepted any filming or advertising offers.

However, the actress is poised to reclaim her nickname of “International Zhang” with her newest project, a comedy film titled East/West. Zhang Ziyi will participate as the female lead and one of the producers. The movie will be helmed by American director Jason Winer, best known for being one of the directors of the sitcom Modern Family.