Although the media exposed international movie star Zhang Ziyi‘s (章子怡) second pregnancy in April, she was a master at hiding her baby bump. Such was the case when she attended the Cannes Film Festival – her last job before her work hiatus – in France last month. The long dress she wore on the red carpet managed to conceal any signs of pregnancy. Even when she celebrated her four-year wedding anniversary with her husband Wang Feng (汪峰), her selfie only revealed her upper body.

Despite being on stealth mode, the Mainland media successfully photographed Ziyi out and about with Wang Feng and their daughter, Wang Xing Xing (汪醒醒). Ziyi wore a loose, white top that showed off her baby bump. But what caught netizens’ attention was the tight-fitting shirt on Wang Feng, who was by his wife’s side the whole time. Netizens laughed and said his bulging stomach was more obvious than Ziyi’s baby bump.

Xing Xing accidentally tripped when she was walking behind her parents, but she was a brave girl and did not cry. She continued on happily after getting up. 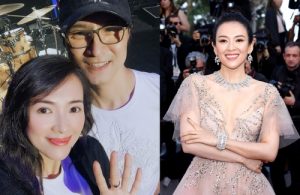