The downside of Chinese actresses who are labeled “goddesses” is that their every flaw gets magnified. Such is the case with Angelababy (楊穎), a beautiful star who is notorious for her lack of acting chops, and the heavily promoted Dilraba Dilmurat (迪丽热巴), criticized for her snake-like appearance. Recently, Zanilia Zhao Liying (趙麗穎) has been added to that list after she shocked viewers with her poor chopstick etiquette in the popular variety show, Chinese Restaurant 4 <中餐廳4>.

Liying rose to fame and landed goddess status after she participated in The Journey of Flower <花千骨> five years ago. Shortly afterward, in 2018, she lessened her workload to prepare for marriage with William Feng (馮紹峰) and subsequently welcomed their first child the following year. As Chinese Restaurant 4 is Liying’s first reality show appearance after giving birth, many returning and new viewers tuned in for the fourth season. 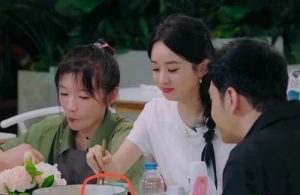 However, her variety show comeback was met with negativity. Fans said she lacked good upbringing after watching an episode of her having dinner with Huang Xiaoming (黃曉明) and Li Haofei (李浩菲). During the meal, she displayed poor table manners by using her personal chopsticks to pick up food from the shared dishes instead of using the communal chopsticks. To make matters worse, she shuffled the food with her chopsticks to find eats that she liked. The audience lamented that it was unsanitary and disrespectful of her to spread her saliva. As criticism began to grow, the actress’ appalling chopstick etiquette became a popular web search.

Her Co-Hosts Come to Her Defense 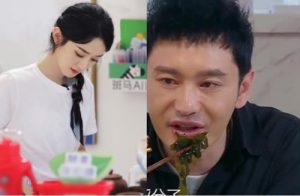 Although the camera also captured moments of Xiaoming looking at Liying’s behavior in shock, he, along with co-host Sean Zhang Liang (張亮), immediately came to her defense to ease the tension. Zhang Liang explained that the food came in small pieces, and the dish was very deep, but no one had the intention to waste food. As for Xiaoming, he shared that they were eating leftovers that didn’t have a lot of vegetables and meat, so they felt lucky whenever they found a piece of meat. He also mentioned that Liying wasn’t the only one who scrambled the dish to find the food she likes.

Though her co-hosts came to her rescue, many netizens were able to find sources indicating that Liying’s disgraceful table manners occurred on many occasions in the past like when she participated in the variety show Back to Field <嚮往的生活>. 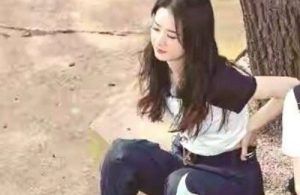 In addition to her terrible habit, viewers said Liying is very lazy. On the show, she would return to her room to rest because of her back pain while the rest of the cast helped cleaned up the restaurant. It doesn’t help that she keeps to herself and isolates from everyone else on the show, often showing a lack of expression and emotion. Many netizens believe that she should resign from the program, as her popularity has already taken a huge hit!