On December 20, the hottest mainland Chinese celebrities took to the stage at the annual Tencent Video All Star Night 2020 awards ceremony with their glamorous looks and dazzling talents. While it is an impressive time for fans to see all the A-listers in attendance during a global pandemic, it is also a brewing spot for gossip. As such, the lack of interaction between claimed rivals Zhao Liying (赵丽颖) and Yang Mi (杨幂) became a hot topic.

The media has always pitted Liying and Yang Mi against each other, as they are both popular actresses born after 1985. Hence, fans took advantage of their appearance at the event to engage in another battle for their idol. 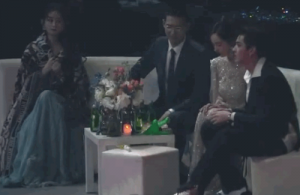 Among the several videos circulating after the event, one of them caught the eye of fans. In the video, Liying, Yang Mi, Kris Wu (吴亦凡), and Li Xian (李现) were seen sitting together in their assigned seats, and Yang Mi and Kris were playing a crocodile dentist toy together. Although Li Xian did not directly participate, he watched as Yang Mi and Kris played and even laughed when the actress’s finger got caught. The interaction between the three was very cute.

While the video only showed Li Xian, Yang Mi, and Kris playing, other photos revealed that Liying was also in the same seating area. However, she did not participate in their game and appeared lonely as she sat on the far left. In other videos showing different camera angles, Liying looked isolated, as she barely interacted with anyone. 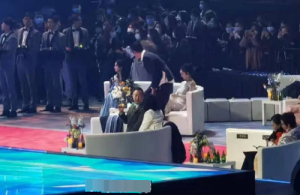 During the entire time, Yang Mi had her back facing Liying while Kris appeared to be the only one who actually greeted her. Yang Mi had turned to glance at Liying during their greeting, but it seemed that she did not greet Liying otherwise. Based on the video, a fan had concluded Yang Mi looks down on Liying.

In defense, Liying’s fans explained that the actress does not attend such events normally. Moreover, she is generally low-key and quiet, so she understandably rarely chats with people.