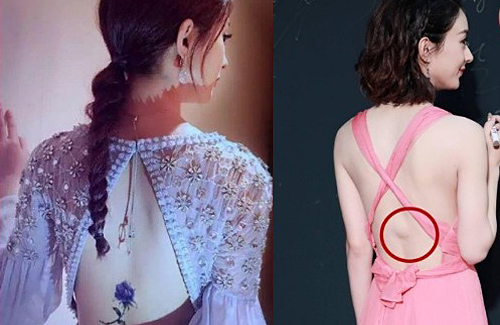 The injury-prone 32-year-old was spotted heading straight for a restorative massage session upon touching down in her hometown of Shanghai.

Chinese actress Zhao Liying (also known as Zanilia Zhao 趙麗穎) has always been known for her hardworking work ethic. Due to a series of past injuries sustained on set, Zhao Liying’s health is compromised and there is now a visible protrusion on her back. Completing three weeks of continuous filming for popular reality show Chinese Restaurant 4 <中餐廳4> recently, she proceeded straight for a bone-setting massage upon her return to Shanghai even before going home.

Chinese Restaurant 4 is the first variety show Zhao Liying appeared on since giving birth, and the actress is expected to inject another breath of fresh air to the show’s well-received formula. Season four required the cast to move food ingredients and carry heavy items as part of preparatory work for the restaurant’s operations. Due to her previous spate of work-related injuries, the physical workload seemed to have taken a toll on the star, who was spotted rubbing her back with an agonizing expression, while resting under a tree at the filming set.

Fell Off a Horse During Filming

A dedicated actress, Zhao Liying would personally film many action scenes herself instead of using a body double, and purportedly spent up to 300 days a year at work, before getting married to fellow celebrity Feng Shaofeng (馮紹峰). Once, she fell off a horse and was even dragged some distance. A few years ago, her waist was scuffled by a harness on the set of film The Palace <宮鎖沉香>, leaving her immobilized on the floor for several hours and sustaining an injury to her spine. Later on the set of Female Prime Minister <陸貞傳奇>, she insisted on filming a wall-scaling scene herself and injured her waist again by accident.

Hurting her back yet again on the set of The Monkey King 3 <女兒國>, a bone can be seen protruding visibly in her lower back, which she covered up with a temporary tattoo when wearing a revealing open-back dress. Due to her constant injuries, rumors once swirled that Zhao Liying would be quitting the entertainment industry for good.

Zanilia Zhao’s Poor Health is Like an “Old Lady”