God Itthipat plays an idol star, while Zheng Shuang acts as his assistant who secretly hides the fact that she is a robot. Like many romcom dramas with hate-to-love relationships or enemies-turned-lovers storyline, Hi, I’m Saori adopts the same concept, but throws in a character twist for a more refreshing narrative. In one scene, mathematical calculations are seen flickering through Zheng Shuang’s eyes. What is the story behind her mysterious identity?

Complicating Zheng Shuang’s developing feelings for God Ittipat is Jerry Yu’s interest in her. Asked what she would do if she likes a boy while knowing another boy likes her, she wittingly answered, “That’s a good thing; I get to choose!”

The trailer was released on September 20, and many fans are excited to watch after seeing Zheng Shuang in 10 different eye-catching outfits and pulling various cute faces. Fans have already captured screenshots from the trailer and made them into gifs and memes. They joked Zheng Shuang could be the next latest emoji gif, as the sight of her cheeky smile and shy act of tucking her hair behind her ears during the scene where the couple are eating a cake together, gave viewers’ butterflies in their stomach. 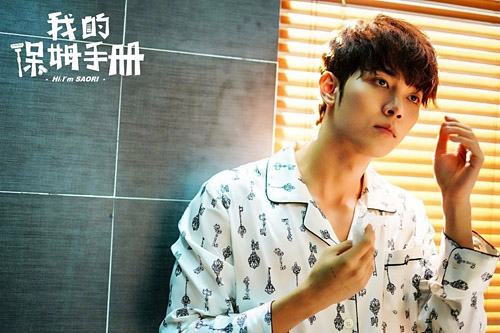