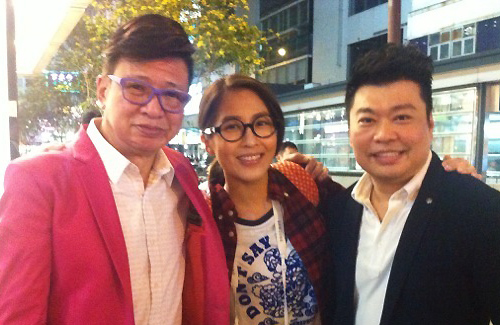 Above: Benz Hui, Sharon Chan, and Louis Yuen film for “My Prime Lady”.

A terrified Sharon Chan (陈敏之) had the side of her face pressed against Louis Yuen’s (阮兆祥) butt in a mini bus yesterday!

While filming Dayo Wong’s (黃子華) comeback comedy series, My Prime Lady <My盛Lady> yesterday, Sharon did not feel awkward despite coming into close contact with Louis’ butt. Louis promised that he will not pass gas during the filming and the pair shared much laughter.

Usually playing sexy roles onscreen, Sharon took on a different role for My Prime Lady and will have several slapstick moments. In the bus scene, Louis developed blisters on his skin due to a food allergy. Sharon misunderstood and thought he had sexually transmitted disease. The two encounter each other on the mini bus and during the confusion, Louis’ butt ends up on Sharon’s face, frightening her so much she started screaming.

Before the actual shoot, the two artists tried out different positions and occasionally, Sharon would pull on Louis’ long pants to get the right angle. At one time, the mischievous Louis deliberately jolted his butt up, which caused an instant uproar among the crew. Sharon joked that though Louis’ butt is big, she is still able to withstand it. Upon hearing that, Louis immediately retorted, “If my butt isn’t big, then I would not be able to sit on her face because her face is so small! Men should not only have strong muscles, but they must also have a ‘stable’ bottom.” When asked if he would fart in Sharon’s face to make it more funny, Louis said that would make the scene turn from humorous to disgusting.

In My Prime Lady, Sharon’s character will be transformed into a singer by Dayo, who is the creative director of a public relations firm. Sharon has not filmed any scenes with Dayo yet, “I am really looking forward to work with him and personally love watching his works. I hope to learn comedy skills from him.”

When reporters asked about her thoughts on good friend, Joel Chan’s (陈山聪) breakup with Florinda Ho (何超雲), Sharon said they no longer keep in touch and did not want to make comments about that matter.