Cecilia Liu: “Even I Don’t Know When I’ll Get Married” 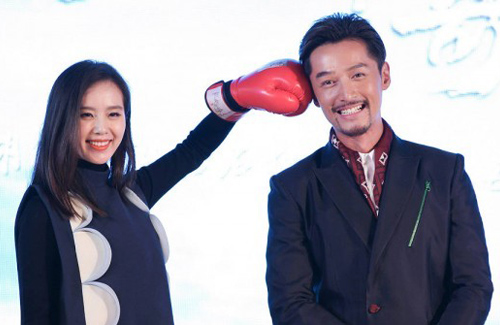 As the October 1 broadcast date of Sound of the Desert <風中奇緣> draws near, the cast and crew have been busy promoting the long-awaited period romance drama. Recently, lead actress Cecilia Liu (劉詩詩) attended a press conference in Beijing, where she was asked about her marriage plans with boyfriend Nicky Wu (吳奇隆).

Sound of the Desert, which wrapped up filming in 2012 but whose broadcast was delayed for almost three years, has been highly anticipated since the project was announced. At the press conference, the audience was treated to a 10-minute-long preview, which showcased the romantic aesthetic of the desert, as well as the bustling life of the city. The video also showed glimpses of the romance between Cecilia and the lead actors, Hu Ge (胡歌) and Eddie Peng (彭于晏).

Though Cecilia and Hu Ge have previously collaborated in many dramas, including the 2008 adaptation of Legend of the Condor Heroes <射鵰英雄傳> and Chinese Paladin 3 <仙劍奇俠傳三>, the two have never portrayed potential lovers. In Sound of the Desert, however, viewers will get to see Jin Yu (Cecilia Liu) confess her love to Mo Xun (Hu Ge), who initially rejects her. Whether the two find happiness together in the end remains to be seen.

Because the three leads are involved in a love triangle in Sound of the Desert, they were naturally asked about the drama’s romantic aspect. However, Eddie replied with a joke, saying, “Actually, Cecilia belongs to Fourth Prince,” referring to Nicky Wu’s character in Bu Bu Jing Xin <步步驚心>.

Cecilia was later asked if Nicky had proposed, to which she answered, “Even I don’t know when I will get married. When there is news, I will definitely tell everyone. Don’t worry.”

Also present at the press conference was an Alaskan sled dog that had portrayed one of the “wolf brothers” that had raised Jin Yu in the desert. Cecilia was very excited to see the dog and shared many stories about working with it. During filming, the dog was extremely attached to her and would listen only to her.

TAGS: Cecilia Liu, Hu Ge, The Sound of the Desert

6 comments to Cecilia Liu: “Even I Don’t Know When I’ll Get Married”