Cecilia Liu’s “The Song of Desert” to Air October 1 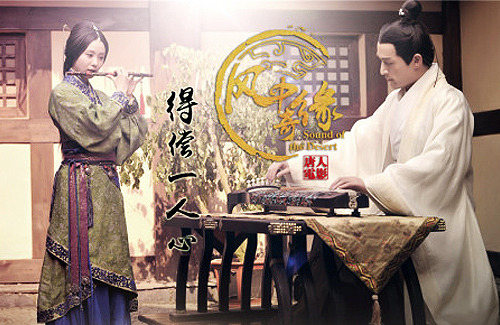 After more than two years of speculation, production company Chinese Entertainment Shanghai announced that its period romance drama, Sound of the Desert <風中奇緣>, will finally begin airing on Hunan Satellite TV on October 1.

Sound of the Desert, which is based off the novel Da Mo Yao <大漠謠> by Bu Bu Jing Xin <步步驚心> author Tong Hua (桐華), initially finished filming in July 2012, but faced delays in its broadcast schedule after SARFT expressed disapproval of the series’ depiction of historical figures. After months with no positive news, some fans despaired of ever seeing Sound of the Desert air on television.

In order to thank fans for their ongoing support, Chinese Entertainment Shanghai held exclusive screenings in Beijing, Shanghai, and Chongqing on September 18. The screenings were not merely compilations of scenes from Sound of the Desert, but rather a specially edited, 66-minute-long movie version of the drama.

To the surprise of many, the movie version also appeared to give away the drama’s conclusion. The final scene depicted Mo Xun (Hu Ge) alone in the desert, watching Jin Yu (Cecilia Liu) and Wei Wuji (Eddie Peng) as they leave. Nevertheless, it is uncertain whether this scene is the drama’s real ending.

Producer Karen Tsai (蔡藝儂) was present at one of the screenings in Beijing, where she took the time to share stories of the behind-the-scenes work for Sound of the Desert, which had previously been named The Song of Desert <星月傳奇>. She also praised the newly released theme song, “Live Well” <好好過>, performed by Hu Ge.