Chilam Cheung in Talks to Join “Dad, Where Are We Going?” Season 2 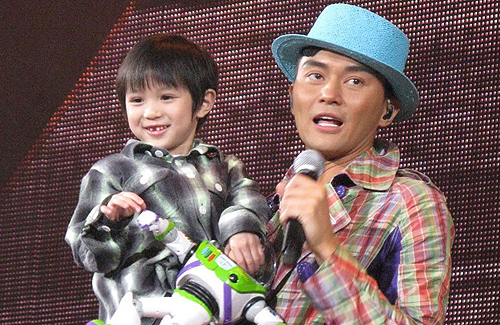 Above: Chilam Cheung and son, Morton, may appear in mainland Chinese reality show, “Dad, Where Are We Going?”

Chilam Cheung (張智霖) is currently in talks to join the second season of Hunan Television’s Dad, Where Are We Going? <爸爸去哪兒>. Based on the original South Korean reality television show of the same name, Dad, Where Are We Going? was a massive ratings hit last year, drawing in 75 million viewers per episode per week across mainland China. The film version earned 570 million RMB in mainland China within ten days of release.

Action star Vincent Zhao (趙文卓) already confirmed his participation on the show, and he and his daughter will be joining the show’s second season, which includes Lu Yi (陸毅) and his daughter, Chen Yufan (陳羽凡) and his son, and soccer player Zheng Zhi (鄭智) and his son.

The Triumph in the Skies 2 <衝上雲宵II> star confirmed in a phone interview that it is very likely that he will sign on to appear on the show with his son. Chilam said, “To an extent, this is a very good learning opportunity for Morton and I, as long as the schedules will not affect my son’s resting time and his education. If the time is right, and the requirements are met, I will not say no. I will have my manager to handle it.”

Banking on the success of season one of the show, the producers are currently planning to make a film version of the second season as well.

13 comments to Chilam Cheung in Talks to Join “Dad, Where Are We Going?” Season 2