Fan Bingbing Shows Off Costumes in “The Empress of China” 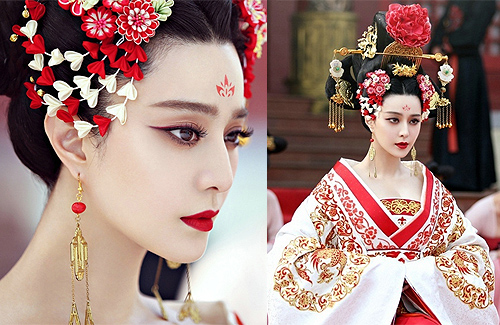 The upcoming historical drama, The Empress of China <武則天>, which stars Fan Bingbing (范冰冰) as Tang Dynasty empress Wu Zetian, is scheduled to begin airing on Hunan Satellite TV near the end of December. Boasting a budget of 300 million RMB, The Empress of China aims to redefine the meaning of “beauty” with its stunning array of costume designs.

Helmed by Legend of Zhen Huan <後宮甄嬛傳> director Gao Yijun (高翊浚), The Empress of China reportedly features more than 1000 costumes for the entire cast. Leading lady Fan Bingbing alone goes through more than 260 costumes, many of them customized and hand-made. Even several of the supporting cast members have 30 to 50 outfits each.

Recently released promotional images of The Empress of China depicted Wu Zetian at various ages, ranging from 14 to 82, with each stage of life portrayed solely by Fan Bingbing. The costumes and visuals were so impressive that they even caught the attention of overseas media, and many Japanese netizens praised Bingbing for possessing an unearthly beauty.

The stills also showed off the eye-catching and unique outfits worn by other members of the cast, which includes actors Zhang Fengyi (張豐毅) and Aarif Lee (李治廷), as well as actresses Janine Chang (張鈞甯), Kathy Chow (周海媚), and Viann Zhang (張馨予).

Apart from the costumes, The Empress of China placed great importance on displaying accurate historical visuals. The crew went to great lengths to recreate the ancient capital of Chang’an, as well as the grand and imposing imperial palace of the Tang Dynasty. The majority of the scenes were filmed using a combination of real-location shoots and special effects. Moreover, the drama established a special warehouse for the design and creation of its many thousand props.