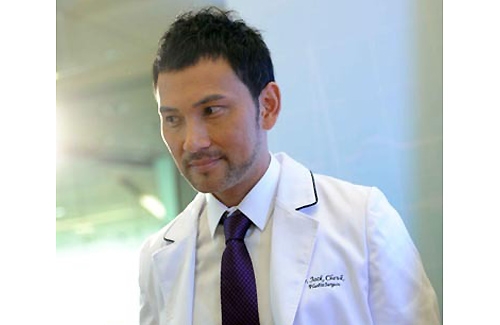 HKTV has been ramping up its marketing efforts, urging TV viewers to connect to its Facebook page and releasing video clips from upcoming series when they reach certain “Like” milestones. This week, Hong Kong reporters were treated to a sneak preview of medical drama Hidden Faces <三面形醫>. At the press interview, star Frankie Lam (林文龍) spoke candidly about his experiences at TVB, and pledged his support to new boss Ricky Wong (王維基).

The first and last episodes will have an extended airtime, similar to TVB’s double-episode format for a series’ grand finale. Hidden Faces cost roughly $1 million HKD per episode, and $20 million HKD in total. As with other HKTV series, Hidden Faces was shot with the latest Arri Alexa digital motion picture cameras used by western film industries. The series will also incorporate real surgical videos, including a double-eyelid procedure.

While watching the preview clip for Hidden Faces, Frankie repeatedly praised its beautiful visuals and the production team’s attention to detail. “Colleagues from my former company watched the clips online and also complimented on the visuals, saying it is very detailed and has good depth of field.”

Frankie further discussed his appreciation for HKTV. “My new company allowed me to enjoy work once again. Filming for television requires team work. We can only work together if we have a common goal. Nowadays I enjoy being able to work seriously and have things to look forward to. Even though I have already worked with the crew many times when we were at TVB, we have a brand new attitude at work now and feel respected by our boss. We work in a very harmonious environment.”

Frankie also defended former TVB artists who spoke out against the company, saying that they are simply heartbroken at the company’s current state. “I also got my start at TVB. I would not be where I am today if I didn’t join TVB. We all wish well for TVB and wish for greater things for the TV industry. While TVB’s production isn’t terrible, without any competition, it is not making any progress. I have high standards for my work as an actor, and I felt very disappointed during my time at my old company.”

Frankie further elaborated on his professional struggles during his time at TVB, saying that he hesitated to speak up against illogical plot due to fear of losing his job. Earlier Frankie and his wife Kenix Kwok (郭可盈) caught an episode of Slow Boat Home <情越海岸線> where Selena Li (李詩韻) fell down the steps and Ruco Chan (陳展鵬) accidentally kissed her while trying to save her. Citing the scene as an example, Frankie commented, “My wife and my reaction was, [Selena] fell down, why was it necessary to have the pouting and kissing? This makes no sense at all. Viewers who take dramas seriously would also feel uncomfortable with how the scene played out. For someone like me who has been acting for over 20 years, it is quite difficult to accept it as it is. I would immediately suggest revisions… and also be mentally prepared to face gossips on-set. Because in my old world (TVB) … everyone is so cautious about keeping their jobs. Changing a script is seen as questioning the production team’s professional abilities.”

When reporters mentioned the other rival station, ATV, Frankie expressed his frustrations at the current licensing progress and shared his confidence at HKTV’s broadcasting rights. “Government officials are such interesting people. They say they worry that a certain TV station would go out of business if they approve another free broadcast license. The government grants license to a TV station that has no drama in production, and then worry that said station will go out of business and refuse to grant further licenses. Does this make any sense at all? I am not worried about HKTV’s licensing situation, because I cannot find a reason for [the government] to not grant the license.”