Him Law Confirms His Return for “Tiger Cubs 2” 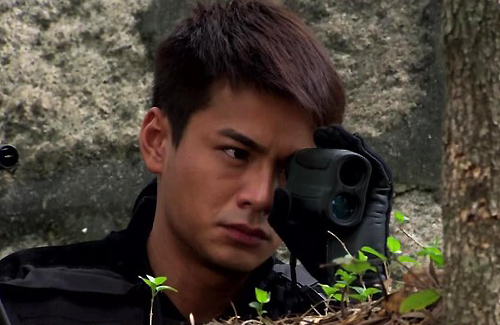 Following Joe Ma (馬德鐘), Oscar Leung (梁烈唯), Mandy Wong (黃智雯), and William Chak (翟威廉), Him Law (羅仲謙) is the next Tiger Cubs <飛虎> star to confirm his return for the upcoming action-packed second installment, which will begin shooting in June 2013. Him will be reprising his role as Acting Sergeant Yu Hok Lai in the SDU sequel.

Him confirmed his reprisal at a function event yesterday. The 28-year-old actor exclaimed that he is thrilled to return and is currently bulking up his body again for the role.

At an earlier press meeting for the upcoming TVB crime drama Sniper Standoff <神槍狙擊2013>, Eddie Cheung (張兆輝) revealed that he had to go through 30 hours without sleep in order to match with the film schedule rundown. Him expressed that he has never experienced sleepless nights while shooting TVB dramas, but the Filmko-managed star revealed that he had tried going through 63 hours without sleep when he had to film for two movies back-to-back a few years ago. “But young guys should suffer a bit,” Him added with a smile.

Having to work hard to train a chiseled look for the role, costar Oscar Leung once complained that his shirtless shower scene from the first Tiger Cubs installment was deleted. He hoped to do another one for the second series so his efforts are not wasted. Asked if Him would also like to be featured in some jaw-dropping shirtless scenes himself, he laughed and said, “I remember I had something like that with Vincent Wong (王浩信) in the first series! But for this series… I want it to be a little sweatier; [scenes that] don’t involve showering. It’s too clean!”

Tiger Cubs, which aired in a weekend time slot last summer, was a blockbuster hit for TVB, forming strong fan-base communities online. Buzz for the imminent sequel had been around since even before the first series ended its broadcast in August 2012.

Although a majority of the main cast are booked to reprise their roles in the sequel, leading actress Jessica Hsuan(宣萱) announced that she will not be returning due to contract disputes. Linda Chung (鍾嘉欣) is confirmed to replace Jessica as the series’ new leading actress.