Oscar Leung is Not a Suitable Singer? 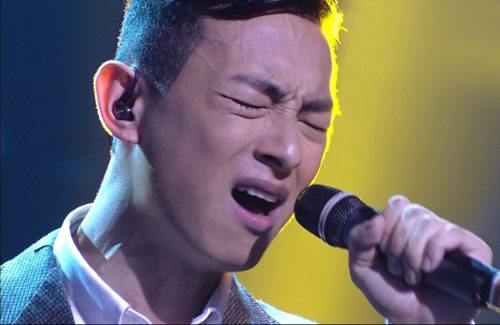 TVB’s reality singing competition Voice of Stars <星夢傳奇> recorded its fourth episode on July 20. Last week, TVB barred the press from covering the third episode, insisting that results of the competition must be kept secret until the official broadcast date. Even overnight sensation Fred Cheng (鄭俊弘), who has earned the name “high score king” due to his well-received performances on the Voice of Stars stage, was not allowed to meet the press.

On Saturday, TVB allowed the media to cover the fourth episode recording, which brought in two new contestants – Corinna Chamberlain (陳明恩) and Grace Wong (王君馨). In the episode, each competing member was required to perform a duet with a celebrity friend. As new contestants, Corinna and Grace did not have the time to prepare for a partner and performed together instead. They chose the competing song, “Amazing Grace.”

Corinna, who was raised in Hong Kong, joked that Grace, who was raised in New York, was even more foreign than herself. Grace agreed and praised Corinna for her strong singing. Both Corinna and Grace had previously worked together in performing gospel songs and they now see each other as friends and supportive competitors.

Fred invited good friend Pal Sinn (單立文), the star of Awfully Lawful <熟男有惑>, to perform with him in the fourth episode. The pair sang The Beatles’ “If I Fell.”

Fred is thankful of Pal for “sacrificing sleep time” to practice and perform the song with him. Having practiced for four nights, Fred and Pal would be singing the song while playing the guitar. As the show’s high score king, did Fred feel extreme pressure to do well? “I don’t know… but I try not to think too much. I just want to use my voice to touch the audience.”

Does he have the confidence to win? “I have confidence in Pal! He changed the arrangement of The Beatles’ song a little big. It’s quieter. He said that I did loud songs in my last few performances. Since we’re going to be playing the guitar, it’s better if the song is quieter, but that almost makes it easier to detect imperfections in the performance.”

Having established artists as contestants, Voice of Stars sets a platform for vocal coaches to be harsher in their critiques. Would judge Eric Kwok (郭偉亮) restrain his criticisms? “No one can change what I say. I will say what is needed to be said. These artists are performing with their hearts. If they can face their gossip and rumors, they can surely face the truth. If they do well, I will praise. If they don’t, I will correct them.”

Rumors say that there would be a resurrection battle towards the end of the competition. Eric said, “I’ve heard of it, but I will be in the United States so I will not be here for it. I will leave on July 24. But I will help out [the show] again when I return.”

Is it true that TVB has fixed Oscar Leung (梁烈唯) to win in the resurrection round? “How are fixed results possible? All of Hong Kong is watching this. You saw what happened – those who performed poorly but still passed the round were heavily criticized [by netizens], but I am really very happy for Fred Cheng. He worked hard for so long. He also has a part in Karma Rider <師父·明白了>.”

Will Eric write a song for Fred? “I do not find the jobs myself, but if he asks, I will help.”

Eric also commented on Oscar’s singing skills, “He is not suitable to be a singer. He’s out of luck there. It’s good that he’s into acting, and he’s a great actor. I want to watch more of his dramas. We are not close personally, but I admire his [courage]. He doesn’t need to compete.”

35 comments to Oscar Leung is Not a Suitable Singer?