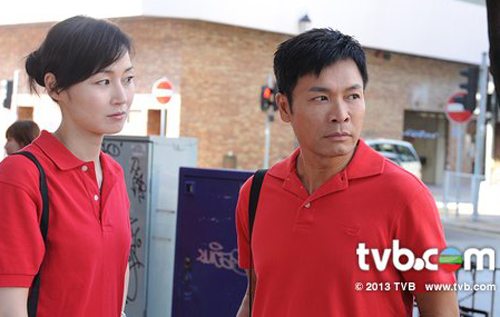 Inbound Troubles <老表，你好嘢!> is not only filled with many comical moments for the viewers, it has also created some awkward moments for its actors, such as Roger Kwok (郭晉安) and Joey Meng ’s (萬綺雯) “Heart to Heart” moment and Roger and Angela Tong’s (湯盈盈) bed scene.

In a scene on location at Fei Ngo Shan, Roger and Joey were supposedly robbed and tied together, chest to chest. It was an uncomfortable position for both actors as the weather that day was humid and warm, with mosquitoes buzzing around. It also did not help that a continuous flow of tourists turned up, with cameras in tow, delighting in the fact that they could catch a glimpse of Hong Kong television in action.

“Pressed chest to chest was indeed very awkward. I was very scared that I will have bad breath, so I brushed my teeth in advance,” Roger said.

With the two actors stuck together and bathed in perspiration, having flying pests as company, Joey said, “We were already feeling awkward and sticky; it did not help that the tourists did not care and just snapped away.” With his back facing the tourists, it was not as compromising for Roger as it was for Joey. To confuse the tourists and get Joey out of the embarrassing predicament, Roger called out loudly, “Sharon Chan (陳敏之), let’s get on with filming so that we can quickly call it a day!” (Sharon and Roger are currently working together in a film, Arrogant Man of Justice <法網囂雄>).

In another scene, Angela who was impregnated by Bob, was trying to seduce Roger with a candle-night dinner of oysters and red wine, so that he would bed her and eventually think that he is the father of her child. Her plan almost worked when the hot-blooded Roger flung her into bed, only to be foiled several times by the doorbell. Roger did not realize at the time of filming that Angela was indeed pregnant with child and fortunately, despite the rough handling, Angela and baby were unharmed. However, the seductive bed scene provided much comic relief to those present, including Joey, who was lured to the scene by the funny comments made by the crew.

In the show, Roger played the role of a typical Hong Kong worker – taking up several odd jobs to make ends meet, including working as a tour guide for tourists from mainland China despite not being able to speak Mandarin.

Roger felt that the drama’s controversial subject may not be a bad thing as it lets people discuss the issues at hand. With an open mind, viewers will even have a better understanding about the cultural differences between Hong Kong and China.

Currently Roger is filming for upcoming legal film, Arrogant Man of Justice <法網囂雄> and it is obvious it has taken a toll on him. Without proper rest and a loss of appetite, he has lost quite a lot of weight.  As such, he plans to go on a short trip over the Lunar New Year holiday with his family of 4 to Singapore’s Universal Studios and Malaysia’s Legoland. Roger said, “I can only go on a holiday with my family once a year and this year, I will bring my children to someplace warm, so that they can experience a different climate at this time.” Even though his children are still young and may not fully absorb what they see on trips, Roger believes travelling provides a good learning experience for children.

Bored with Life of a Housewife

After almost a decade of semi-retirement, Joey Meng claimed she has returned to the workforce because she got bored from waiting for husband, Chan Sap Sam (陳十三) to find time to spend with her. Ever since Chan Sap Sam has his own office, he has been spending little time at home and Joey has already acquired all the clay-making and floral arrangement skills she can learn.

Joey has chosen to sign TVB with the hope that the new environment as well as the different kinds of scripts and roles that it offers, will spur her to work harder so that she can excel amongst the younger generation of artists.