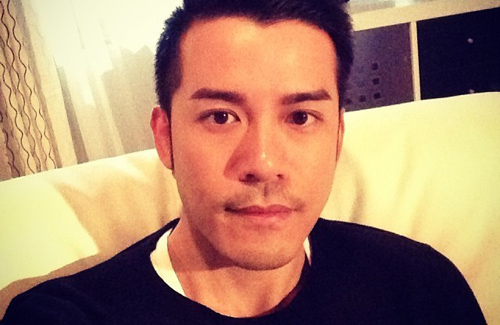 Though the production of TVB’s The Apostle <使徒行者> has experienced some casting problems over the past few months, the filming has been going very smoothly. Sammy Sum (沈震軒), who replaced Sammy Leung (森美) after the latter withdrew from the drama due to health concerns, began shooting for the drama several weeks ago and already completed several reshoots. Sammy portrays Lin Ho Kan, a police officer and the boyfriend of Mok Sin Yan, portrayed by Sharon Chan (陳敏之).

Earlier this week, Sammy and Sharon were spotted filming a passionate kissing scene at Central Ferry Piers. As it was a windy night, the director requested the onscreen couple to do the same kissing scene six times for a better effect. After the kissing, Sharon also hugged Sammy from behind as the two looked at the coast of Hong Kong.

Sammy and Sharon did not feel embarrassed after their intense scene. After kissing, both wiped their mouths, laughed, and then began to happily chat with each other.

The Apostle, produced by Man Wai Hung (文偉鴻), is a crime drama about undercover police officers, and stars A-list actors Michael Miu (苗僑偉), Charmaine Sheh (佘詩曼), and Raymond Lam (林峯). With its large budget, the drama is touted as one of TVB’s biggest productions for 2014.