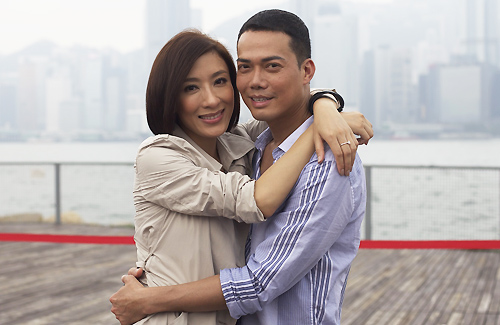 Half of TVB legal drama, Friendly Fire <法網狙擊>, has already been broadcast, including many flirtatious scenes between the characters. Near the beginning of the series, Toby Chan (陳庭欣) and Christine Kuo’s (苟芸慧) characters seduces Michael Tse’s (謝天華) character. A later scene involves Sharon Chan’s (陳敏之) character ending up soaked after falling into the ocean and revealing her undergarments.

In episode 12, which was broadcast on January 2, a bed scene with Tavia Yeung (楊怡) and Michael’s characters in an apartment that lasted for two minutes attracted viewers’ attention. The scene spoke of JJ Kam (Michael Tse) taking care of Chris Fong (Tavia Yeung) after Chris is drunk from a heavy alcoholic drink. They are both soaking wet from the heavy rainfall outside, and JJ helps Chris take off her soaking clothes inside the apartment. Chris then began tearing off JJ’s wet garments as well, and the ex-lovers engage in a long, deep kiss.

Speaking of the scene, Producer Man Wai Hung (文偉鴻) said, “Tavia and Michael’s flirting scene is supposed to express their inner conflicts. In the drama, Tavia’s character broke up with Michael’s character because of her family’s genetic disease.” The producer emphasized that the scene, which was stated to be two minutes, also consisted of the ex-lovers’ flashbacks. The bed scene itself did not last for that long. Most importantly, there was no explicit content.

Producer Man Wai Hung further revealed that Michael and Tavia were informed the synopsis of the scene before filming began, and they had the freedom to develop it the way they want. Michael and Tavia were both very involved in their roles, so the scene was a success with only one shot. There were no cuts, and they did not have to accommodate the positioning of the camera while filming. This enabled the scene to flow naturally, allowing the audience to feel the romance between the characters.

The following scene in which the police suddenly appear at the door to perform a license check served as a comic relief.