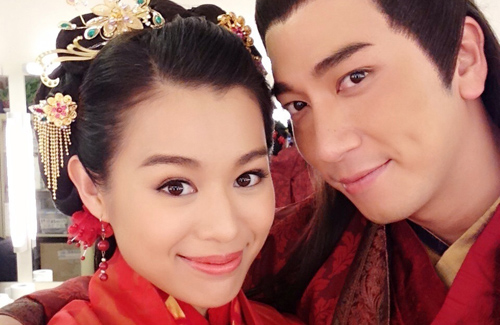 Filming for the trailer clips of TVB’s upcoming 2014 Sales Presentation is well underway. On October 2, the cast of the upcoming light-hearted comedy drama The Vinegar Lady <醋娘子> went to film a few action sequences at Taoist temple Wun Chuen Sin Kwoon in New Territories, Hong Kong. Starring Myolie Wu (胡杏兒), the Ming Dynasty comedy is produced by Poon Ka Tak (潘嘉德) and was meant to be a reunion drama for the Wars of In-Laws <野蠻奶奶> cast, until Liza Wang (汪明荃) turned down to star.

The action sequences that were being filmed involved Myolie throwing copper mallets at Derek Kok (郭政鴻) and  Koni Lui (呂慧儀), who portray a pair of comedic villains. Myolie had to retake the sequence several times, but was fortunately not injured. “No one wants accidents, but [TVB] has precautions. It’s much better than filming in the mainland. The action scene I just filmed was a very simple one. If I did get hurt, it would have just been my fault.”

She clarified that The Vinegar Lady is not meant to be an action drama as the sequence filmed in the trailer was for comedic affect. Nonetheless, Myolie exclaimed that she always wanted to film action dramas, and expressed her wishes to portray a police officer.