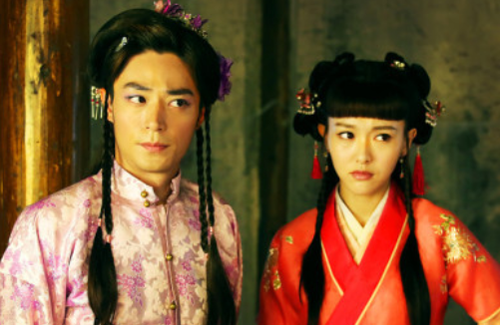 A mix of comedy and drama, Perfect Couple introduces us to Jin Yuanbao (Wallace Huo), a pampered young man who, by order of the Empress Dowager (Tao Huimin 陶慧敏), is expected to marry an aristocratic young lady named Jiang Xiaoxuan (Gong Mi 貢米). Unfortunately, Xiaoxuan is in love with another man (Huang Ming 黃明) and, in order to escape the marriage, persuades the odd but heroic Yu Qilin (Tiffany Tang) to step in as the replacement bride.

Due to Tiffany and Wallace’s popularity after they first worked together in Chinese Paladin 3 <仙劍奇俠傳3 >, Perfect Couple immediately captured the attention of netizens once it announced its leading roles. The drama also features a storyline created by well-known mainland Chinese novelist Tong Hua (桐華), whose online novel Bu Bu Jing Xin <步步驚心> rocketed her to fame after it was adapted into a TV drama in 2011.

In addition to Wallace and Tiffany, Perfect Couple will also feature appearances from mainland Chinese actor Wayne Wang (王陽) and mainland Chinese actress Vivian Wu (鄔君梅). The series is a co-production of Zhejiang Dream Stardom Film & TV, known for producing Sealed with a Kiss <千山暮雪> and Ru Yi <如意>, and Huajae Studio, Wallace’s personal production company. Perfect Couple is the first ancient drama that the actor has produced since establishing his own studio last year.