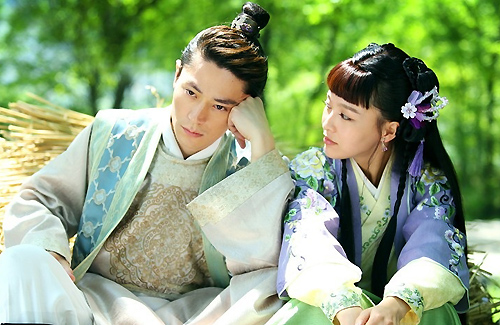 Since Perfect Couple is a romantic comedy, the filming atmosphere is very light-hearted, and Wallace and Tiffany share romantic sparks off-screen that could rival their on-screen chemistry. Having previously collaborated five years ago in Chinese Paladin 3 <仙劍奇俠傳3>, the two are clearly comfortable with one another on set and are not beneath pulling minor pranks on each other.

In particular, Wallace often exploits his status as the drama’s co-producer to tease Tiffany. In one behind-the-scenes clip, he pokes Tiffany with his fan and then jokingly puts her in a headlock. When the director calls them to attention, Wallace immediately shushes Tiffany, even though he was the one who initiated the tomfoolery.

Another scene shows Wallace practicing walking in a slow-paced, hunched-over fashion, as if his character is very tired. Tiffany decides to temporarily join him in plodding along, but after a few trial runs, Wallace turns to the director and asks, “Can we let Tang Tang [Tiffany] do this with me?”

Though Wallace is usually the one who begins joking around, the bantering can go the other way as well. In the video, Tiffany can be seen stepping on Wallace’s foot, pushing him four times in a row, and exaggeratedly elbowing him.

If the behind-the-scenes clips are anything by which to judge, Perfect Couple should be an immediate favorite among fans of Wallace and Tiffany. Fans of Tong Hua (桐華), who penned the online novel Bu Bu Jing Xin <步步驚心>, will also want to check out the drama for the storyline, which was created by the novelist. Perfect Couple will begin airing on April 21.