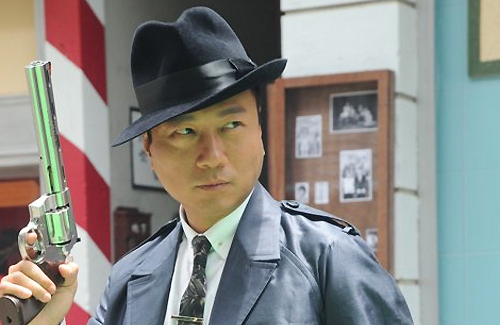 Although slammed by the audience for its poorly executed storyline, several critics argued that the unique story of Bullet Brain encourages innovation and creative risk-taking. The final episode, however, is leaving some supporters of Bullet Brain to hold back the praises.

In the episode, Columbo (Wayne Lai 黎耀祥) uses the power of his enhanced brain cells to enter Eva’s (Sire Ma 馬) consciousness and save her from dying in her coma. Viewers noticed that Columbo’s dream sequence resembled Christopher Nolan’s 2010 film Inception, a science fiction heist film involving a group of professional dream-stealing thieves. Like the characters in Inception, Columbo was advised to carry a totem, an object to differentiate the reality and the dream state. Columbo’s totem was his wedding ring – which he wore on his right hand to remind himself that he was still dreaming.

Viewers were also reminded of the Wachowski Brothers’ The Matrix when Mui Mui took Columbo to a chamber full of doors, in which each door opens up to another’s dream. Because Mui Mui’s consciousness was too powerful, Columbo almost falls to his death, but the singing voice of Fei Lung (Edwin Siu 蕭正楠) from the real world brings him back to reality. Columbo shoots Mui Mui’s consciousness and frees Eva from her burden.

Columbo and Eva awake. Fei Lung marries Shuk Han (Devily Leung 梁麗瑩) and is promoted to inspector. Columbo and Eva then secretly leave the hospital, but before leaving Hong Kong for a life overseas, Columbo has one last meeting with the immobile Ping On (Ngo Ka Nin 敖嘉年), who is now mentally unstable.

The episode ends with a confusing finale – a 60-year-old white-haired Eva holdings hands with a youthful and ageless Columbo.

Some viewers found the final episode meaningful and expressed genuine enjoyment. Others bashed the episode for rehashing old plots and ideas from other films and television, including Heroes and Twilight. Bitter viewers insisted that the poor casting was the main reason to the drama’s failure.

Well, at least we know that a sequel will definitely not happen.