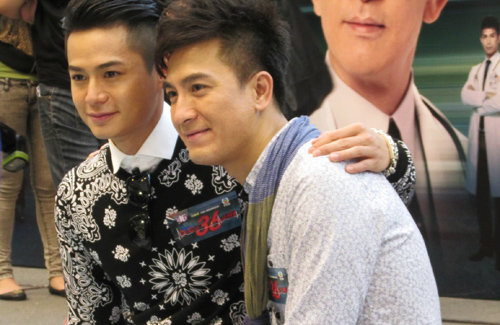 Him Law (羅仲謙) and Tavia Yeung’s (楊怡) relationship is an open secret within the entertainment industry. At the latest promotional event for The Hippocratic Crush 2 <On Call 36小時II>, the two did not appear awkward around each other and posed for press photos. Speaking of this year’s TV queen battle, Him stood in front of Tavia’s large promotional photo and gave a thumbs-up, showing support for his girlfriend.

The cast was challenged to a series of fitness activities. The men had to do push-ups to show their strength. Him appeared to slack off, so the producer made him complete the push-ups on one hand. Tavia was told to be the judge, but instead helped Him and announced he did not have to do it anymore.

Tavia wore a sweater-like dress and scarf, and was constantly seen wiping away sweat. When interviewed, she said she never thought the air conditioner would be so weak. Asked why Him was not helping Tavia cool down, he expressed, “She’s a very independent woman!” Him further explained Tavia had not been deliberately helping him earlier, and was just trying to quicken the process so the activity would not take up too much time. Tavia added, “If the air conditioner was stronger, I would’ve asked him to do more!”

When Tavia took photos with surrounding fans, Him smiled and kept his distance. He explained, “I was afraid the fans wouldn’t like it. I’m quite big and I didn’t want to block them.” Both Him and Tavia expressed they will not have time to watch the first episode of The Hippocratic Crush 2, but will catch it later online.

Kenneth Ma (馬國明) flew to Hong Kong to attend the promotional event in the midst of filming Jackie Chan’s (成龍) movie, Fate is a Game <緣來是遊戲>, in mainland China. He revealed the project is not yet complete, but should be done before the TVB Anniversary Gala. Kenneth is happy to be earning RMB although he takes on the role of a supporting actor in the film. He hopes for more chances in mainland China, but still enjoys Hong Kong as his main base.

Besides Kenneth, this year’s strong TV King contenders include Chilam Cheung (張智霖) and Dayo Wong (黃子華). Speaking of his own chances, Kenneth expressed, “It’s okay, I’ll take things easily. I’ve tried my best, and I’m happy to be competing with veterans. I participated in both Triumph in the Skies 2 <衝上雲霄ll> as well as The Hippocratic Crush 2, so I’m happy if they’re well-received.”

64 comments to Him Law Supports Tavia Yeung As TV Queen