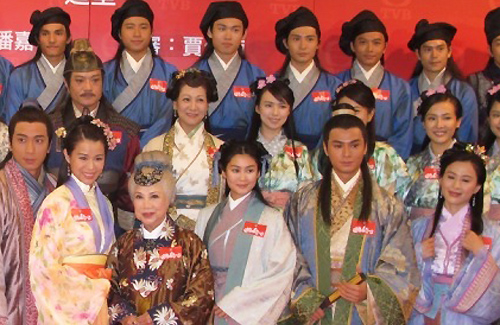 Originally conceived as a follow-up to the popular Wars of In-Laws <我的野蠻奶奶>, The Vinegar Lady was later scrapped from the lineup when Liza Wang (汪明荃) was unable to participate due to schedule conflicts. The franchise’s two major stars, Myolie and Bosco Wong (黃宗澤), had also broken up in real life, making the pair-up difficult to happen.

The period comedy was later revived and placed on TVB’s 2014 schedule. Possibly a response to the increasing complaints against its overused pairings, TVB decided to match Myolie with the heavily promoted Him Law. The new pairing sparked public interest, though ultimately Ron Ng is confirmed as Myolie’s love interest in the series, likely a result of their popularity in Triumph in the Skies 2 <衝上雲霄 II>.

Although Him lost the male lead status, he will still have a romantic story line with Myolie in The Vinegar Lady. The two will cross paths to fulfill an arranged marriage, though they will eventually divorce. Eliza Sam is also involved in the series’ complex love relationships, showing affections for Ron but will later be paired with Him.

Despite its intended ties with Wars of In-Laws, Myolie insists that the two series are completely separate, saying that this time she will portray a woman prone to jealousy and not at all sassy.

While many TVB artists have yet to benefit from their company’ proposed new work policies, Myolie shared that the situation is slowly improving and that she has already received scripts for more than ten episodes. She is also looking forward to having more rest time, joking, “I am getting old…. I really need to sleep more, or I will easily look very haggard.”

97 comments to Myolie Wu At “The Vinegar Lady” Costume Fitting