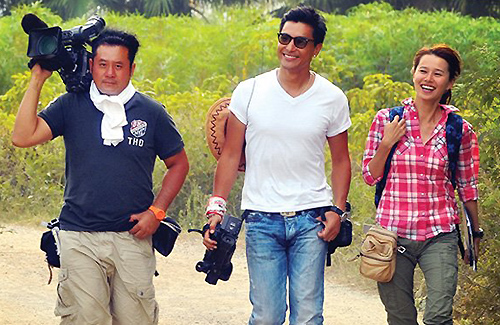 Reality Check is the next 2013 television drama, after Inbound Troubles <老表，你好嘢！>, to have a plot that revolves around Hong Kong’s changing society. While Inbound Troubles centered in on the contradictions and tensions between the people of Hong Kong and mainland China, Reality Check chose to discuss about the urban phenomenon of spoiled and overindulging 90s children of Hong Kong.

In Reality Check, creative director, Summer (Ruco Chan), shoots a reality show that documents the experiences of 16-year-old Sky (Hero Yuen 阮政峰) living in a farming village in Qingyuan, Guangdong. Having to live under harsh conditions in a remote location, Sky is reluctant to continue the show.

Ruco Chan, Evergreen Mak, and Priscilla Wong (黃翠如) portray a director, a cameraman, and a production assistant (PA), respectively. Their roles also allow the onscreen actors to grasp a feel of what it means to be part of a professional filming crew.

Evergreen admitted that he based the performance of his own role on Reality Check’s own cameramen. “It was even better that they are always on set, as they would always be there when I needed to ask questions. If these professionals believe that I did great on my role, I will be very satisfied!

“I have always respected camera operators because it is a really difficult job. For this drama, I had to carry a 30 to 40 pound camera around for three months, and my respect for them have gone up a level. When we filmed the reality show segments in Qingyuan, I tried shooting a few scenes myself. I am not a professional, so my camera was always out of focus, but thankfully, some of my shoots were useful. These scenes will be shown in the drama.”

Reality Check not only provided Evergreen with technical knowledge, but also personal knowledge. Along the four-month journey of filming Reality Check, Evergreen became close friends with his costars and filming crew. And like the reality show’s Hong Kong youth Sky, Evergreen also began to realize how lucky it was to be raised in Hong Kong.

“When we went on location at some of the villages in Guangdong, I met a 40-year-old woman whose farthest journey away from home was 60 kilometers beyond Yingde City. She has never even been to Guangzhou or Qingyuan! On the other hand, Hong Kong people have been to many places, because we have the privilege to do so. Filming for Reality Check was also a heart journey for us, because it makes us realize how lucky it is to be a Hong Konger,” Evergreen said.

Reality Check is Priscilla Wong’s debut television drama. The 31-year-old expressed that filming for Reality Check was not as difficult as she had perceived, being that her role, May, is much like herself.

“My character is raised in a family that favored boys over girls. My father is from Chaozhou, so he prefers boys. My three sisters and I had to rely on each other and word hard. We told ourselves that we must go to university, and we were all very hard working. As for myself, I am also a struggler. As long as I have set goals, I will go all the way to achieve them. My character May always tell herself that she is a cow. I can absolutely relate to that! It is like I am acting myself.”

Surprisingly, Reality Check has been one of Ruco’s hardest dramas to act in recent years. “The producers told us that the goal of the drama is to be able to give the audience a very relaxing feeling. I was worried that the audience would get bored if the our performances were too relaxed, but after watching the first two episodes, I believe that the word ‘relaxing’ is a very suitable term to describe the drama. None of the actors in the drama were acting. They were being their roles. The performances were not only relaxing, but also very comfortable.”

Although the reality show serves as the backbone of the story, Summer’s conflicting relationship with his two mothers, foster mother Chui Wan (Louise Lee) and birth mother Siu Han (Rebecca Chan) is the drama’s main subject.

After The Other Truth <真相>, Ruse of Engagement <叛逃>, and Brother’s Keeper <巨輪>, Reality Check is Ruco and Louise’s fourth collaboration and third drama portraying mother and son.

“I call her my mother now,” said Ruco. “Louise is very kind. She knows about my busy schedule and she often offers me some health pills. I think Louise is the drama’s true female lead. In the story, she loses her husband, has to raise her children single-handedly, and is always surrounded by family conflict. She will also be a gambling addict, and I am able to observe the many levels of Louise’s superb acting. She is known for portraying kind motherly characters, but this role is very different for her. I know she really enjoyed playing this role.”

Reality Check is currently airing on TVB’s Jade, as part of the channel’s third prime-time lineup. With 20 episodes, the drama’s finale is slated to air on March 15.