Angelababy Shows Off Sexy Figure in “Rise of the Legend” 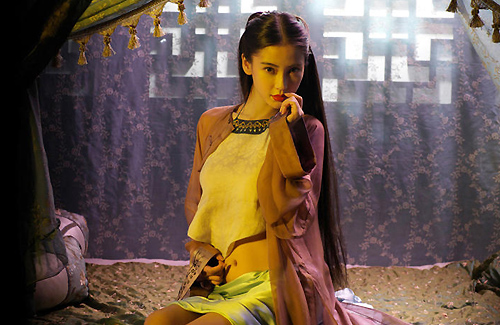 Many of the previously released trailers of director Roy Chow’s (周顯揚) upcoming kung fu flick, Rise of the Legend <黃飛鴻之英雄有夢>, showed a brief glimpse of a mysterious woman baring her back. Only recently was it revealed that the woman is actress Angelababy (楊穎), who plays a prostitute that falls in love with Eddie Peng’s (彭于晏) Wong Fei Hung.

Though the story of Wong Fei Hung has been adapted many times, Rise of the Legend marks the first time that the protagonist will be pursued by two females at the same time – Angelababy’s Xinlan and Wang Luodan’s (王珞丹) Ah Chun. Director Roy Chow explained that he and his wife, screenwriter Christine To (杜致朗), deliberately added in more romance scenes to appeal to modern audiences and make the story more interesting.

However, Angelababy’s purpose in the movie is not only to propel the romantic storyline along or simply provide eye candy for viewers. In Rise of the Legend, her character is involved in an important fight scene with the main antagonist, played by actor Feng Jiayi (馮嘉儀).

Because the fight takes place in the public baths, the scene was extremely difficult to film. Moreover, during the fight, Angelababy is wearing a dudou undergarment, which covers only her chest and abdomen, so the crew had to be extra careful in order to avoid a wardrobe malfunction.

Despite the difficulties, Angelababy insisted on not using a double. The scene ended up taking 15 hours to shoot, mostly because Angelababy kept telling the director, “It’s okay. I can do it. Let’s do a retake so it will be better.”

“I really like the character of Xinlan,” said Angelababy when asked why she went all-out to portray this character. “She is persistent in love, even to the point of not caring about consequences.”

“Rise of the Legend” Storyline and Characters Intro