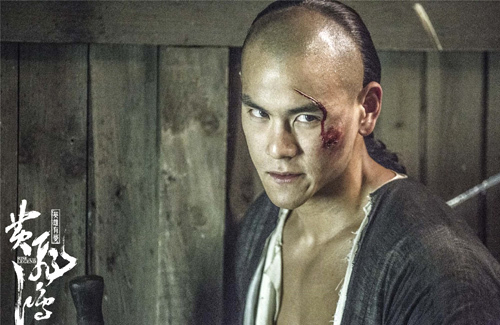 In “Rise of the Legend” <黃飛鴻之英雄有夢>, the latest film adaptation of the life of  Wong Fei Hung, Eddie Peng (彭于晏) plays the famed Chinese martial artist. The film depicts how Wong Fei Hung grows from a young and brash youth to become one of the world’s greatest kung fu masters.

Having idolized Wong Fei Hung since childhood, Eddie has seen all the other film adaptations featuring acclaimed actors such as Jackie Chan (成龍) and Jet Li (李連杰). Eddie admitted that he was mentally prepared for the media comparing his performance with past actors’ depiction. He said humbly, “Seniors such as Jackie and Jet inspired my love for kung fu and action films. They have given me a lot of strength!” Eddie added that he was happy just to have the opportunity to play such a notable role.

Eddie underwent six months of intensive and arduous martial arts training so he could personally film many of the martial arts scenes. When viewing film footage of his training process, Eddie laughed at how “crazy” he looked.

Nevertheless, Eddie’s humor belied how painful and dangerous the training was. He suffered numerous injuries, even tearing the ligament in his right wrist when filming a stunt which required him to chop a stone pillar in half. Eddie recounted, “When I first took a blow at the pillar, it did not break apart and my hand became swollen. It was excruciatingly painful, but I had to chop the pillar in half. So I held back my tears and took another blow at the pillar. Luckily, this time I succeeded!”

Due to the injury in his right wrist, Eddie had to subsequently film fight scenes with his left arm. Eddie said cheerfully, “Since I’m not particularly talented, I can only rely on my resolve!”

Fortunately for Eddie, his hard work paid off, as the film producers, and also his co-stars, Sammo Hung (洪金寶) and Tony Leung Ka Fai (梁家輝) were full of praise for his performance. They felt that Eddie had given an extremely convincing portrayal of Wong Fei Hung.