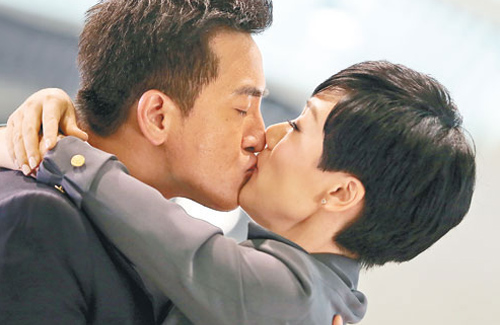 Kenneth, who reprises his role as airline pilot Roy Ko, will continue his romance with the head stewardess Heather Fong, portrayed by Elena. The refreshing duo had an intimate kissing scene on the first day at work, but no awkwardness lingered between them when they kissed.

“It’s a good thing that both of us are close,” said Kenneth. Due to his busy filming schedule, Kenneth and Elena’s outdoor scenes in England were omitted. Elena said she was upset that she could not go. Kenneth explained, “I have to stay in Hong Kong to film my drama, so I apologize.”

Since Kenneth established his name when Triumph in the Skies aired, Kenneth agreed to his guest appearance in the movie without asking about money or screen time. “It was producer Tommy Leung (梁家樹) who gave me the opportunity in 2003. When he asked me to return for the movie, I have to pay my gratitude.”

Kenneth recently flew to Singapore to attend the opening ceremony of a jewelry brand. When asked if he had found new love, Kenneth shook his head, “The feng shui master said I will not have the chance to marry until 2018 or 2019, so I am not in a hurry. But if I can’t find a partner by then, I think I’ll be alone forever.”

In related news, Oceane Zhu (朱璇) will have a relationship line with Chinese actor Dean Liu (劉俊孝) in the Triumph in the Skies movie. In the movie, Deane will propose to Oceane while in flight. Oceane said her real life is not as dramatic, adding that she prefers living a simple life. Unlike Dean’s character, she finds the idea of having unrequited love for someone to be really tiring, and will not be stubborn about it.

Asked about memorable filming experiences, Oceane said she filmed the movie in England during the Mid-Autumn Festival. The cast celebrated the festival at the beach, and Louis Koo also treated them for dinner.