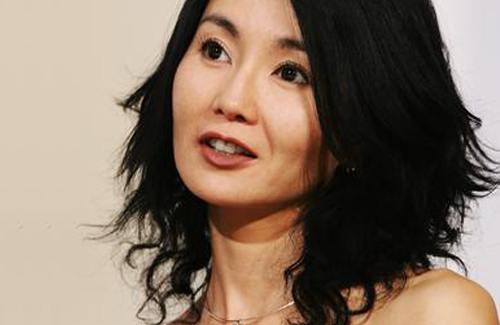 Retired actress Maggie Cheung (張曼玉) was recently spotted on a date with a non-Chinese man, estimated to be in his early 30s, thus sparking reports that the 49-year-old is involved in a “mother-son” relationship.

After her breakup with German architect Ole Scheeren in 2007, Maggie began to pour her energy into work. Despite enjoying a fairly successful film career, she decided last year that she wanted to turn her attention to singing, film editing, and being a DJ.

It was her interest in music that brought Maggie and her current boyfriend together, as both of them love playing music. When the two first met half a year ago, Maggie saw him as only an ordinary friend. However, his ardent pursuit later won her over, and they became an item, despite the 20-year age gap.

Recently, Maggie and her boyfriend were photographed in Hong Kong, taking their dog on a walk. Contrary to her usual mature look, Maggie was dressed in apparel more befitting a young lady, perhaps in a meticulous attempt to appear closer in age to her man.

Since ex-boyfriend Scheeren is also a foreigner, not to mention seven years Maggie’s junior, it is not surprising that Maggie has found another non-Chinese man for her new flame. However, many netizens were surprised that the age gap between the two is so large and remarked that the relationship could almost be that of a “mother-son couple.”