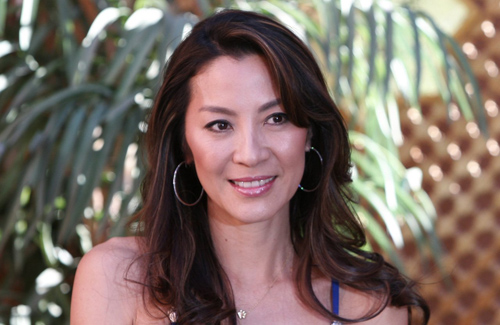 Malaysian-born actress, Michelle Yeoh (楊紫瓊), was recently in Taiwan to promote her documentary film, Pad Yatra: A Green Odyssey <綠色足跡>, in which she is the executive producer.

The documentary is based on the 450 mile journey of 700 people across the Himalayas, hiking from village to village to educate locals about environmental conservation, while picking up trash and planting 50,000 trees along the way. The ecological expedition was led by His Holiness the Gyalwang Drukpa, an influential Buddhist leader, and calls to attention the damage done to the planet’s “3rd Pole,” a glacial region as a result of global warming.

Michelle produced Pad Yatra: A Green Odyssey to reflect her love for the earth and its people. She leads an environmentally-conscious lifestyle, using as little water and electricity as possible and does not use PET bottles. As an ambassador of the FIA Foundation for the Automobile and Society, she also encouraged her fiance and FIA President, Jean Todt, to convert to electronic mediums rather than utilize excessive printing for corporate communications.

Although Michelle has originally planned to narrate Pad Yatra: A Green Odyssey, she was unable to do so because of her role of Aung San Suu Kyi in The Lady.  To portray the politician and Nobel Peace Prize winner, Michelle learnt Burmese and researched Aung San Suu Kyi’s background thoroughly.

Michelle maintains a healthy lifestyle and will spend an hour exercising each day. Although the 44-year-old does not restrict her diet, she believes moderation is key. Eating small frequent meals, she has managed to maintain her svelte figure. She also plays nutritionist to her 67-year-old French fiancé, Jean Todt. “As you know, the French loves their bread. So does Jean. He will often spread his bread thickly with jam. I told him, how can you eat like this and not exercise?” Following Michelle’s loving advice, Jean exercises and eats more healthily now, even managing to shed 14 kg.

Michelle and Jean met in 2004 when he was the CEO of Ferrari. In 2008, the couple got engaged but has yet to settle on a date for their wedding. Michelle was married to Hong Kong businessman Dickson Poon (潘迪生) for three years, but divorced in 1991. Michelle hopes that her wedding to Jean will be a special event, but they have yet to think of an actual wedding plan. However, because of Michelle’s 87-year-old father, the wedding will definitely be held in Malaysia.