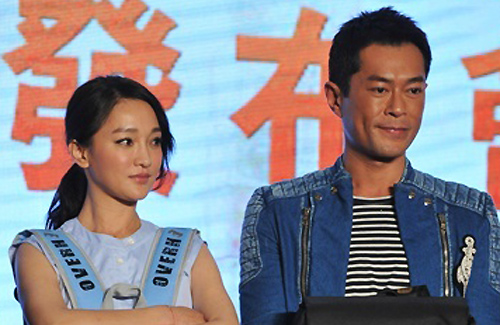 Alan Mak (麥兆輝) and Felix Chong‘s (莊文強) crime thriller Overheard 3 <竊聽風雲3> will touch upon some of the controversial practices of Hong Kong’s real estate industry. Due to the sensitive nature of the on-going battle over limited lands, the directors are already expecting the film to generate heated discussion, and even joked that they may lose their lives over these leaked secrets.

Overheard 3 is the third and final installment of the popular thriller trilogy. All three films star Sean Lau (劉青雲), Louis Koo (古天樂), and Daniel Wu (吳彥祖) in unrelated stories, though all involved the use of wiretapping as a part of crime investigation. While the first two films focused on illegal activities on the stock market, Overheard 3 will instead explore ruthless land developments, a real issue that continues to plague local citizens.

Once again portraying a tycoon with eyes only on profits, Sean Lau uses his wealth to purchase many land-building grants that the government has issued to indigenous male heirs living in rural New Territories. He dreams up a plan to use these grants to build bigger developments with higher resell value, while his father Kenneth Tsang (曾江) and sister Michelle Ye (葉璇) strike up deals with developers in China. The film’s latest trailer shows locals being harassed to sell their lands, and they later stood up in protest against the forceful buy-outs.

The cast attended the film’s Beijing press conference on April 28. Producer Yu Dong (于冬) commented on the unique choice of subject matter, saying, “Hong Kong’s real estate industry has many hidden stories that have yet to make their way onto film. This time around, we want to discuss how capitalists bully the poor in order to make a profit.”

Besides the three superstars, acclaimed Mainland actress Zhou Xun (周迅) also appears, playing a widowed mother of a young son. Since the previous two films were driven strictly by their male characters, some questioned whether Zhou Xun’s talent will be wasted on the film. Director Mak assured that female characters will play a crucial role in the third installment. Sean feels that both Zhou Xun and Michelle are the right choices for their roles and finds their addition refreshing. “[Watching] a male-oriented film is like drinking coffee. The more you drink, the darker you become. [Zhou Xun and Michelle] are very important this time, like a fresh spring.”