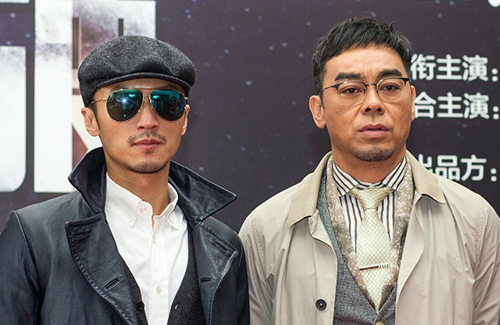 Unlike Sean and Nicholas’s previous film together, the 2012 mystery flick The Bullet Vanishes <消失的子彈>, Jing Tian Po will not feature a detective duo. Rather, Nicholas will play the master sleuth who goes up against a criminal psychologist, portrayed by Sean.

Although Nicholas is mostly known for his prowess in action scenes, Jing Tian Po focuses more on the characters’ battle of wits than on any physical skirmishes. “This is the first time a movie has not asked me to do a fighting scene, so there are more opportunities for me to polish my acting skills,” remarked Nicholas.

Nicholas further praised the story of Jing Tian Po for being full of tension and confidently added that his acting ability still has potential to improve. Since Nicholas has worked with Sean before, they have good chemistry on set and he can often tell what Sean wants to do in a particular scene.

Sean and Nicholas’s previous movie, The Bullet Vanishes, was nominated in 13 categories at the 32nd Hong Kong Film awards, including a Best Male Actor nod for Sean. Though it failed to win a single award, The Bullet Vanishes was still praised for breaking out of the typical detective-criminal story mold. As a result, Jing Tian Po is sure to catch the attention of fans eager for a second collaboration between Sean and Nicholas.