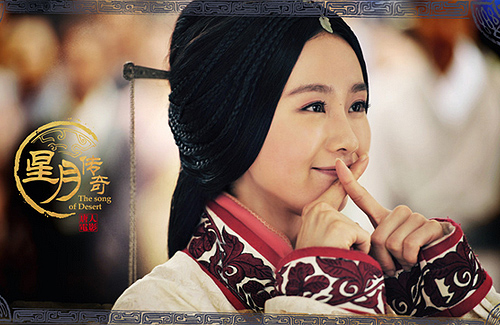 Translated literally as “Legend of the Moon and Stars,” The Song of Desert is based off Tong Hua’s novel Da Mo Yao <大漠謠>, which tells of the love story between wolf girl Jin Yu, who was raised with the Hun people, and her two suitors. Starring Cecilia Liu (劉詩詩), Hu Ge (胡歌), and Eddie Peng (彭于晏), The Song of Desert wrapped up filming in 2012 and was expected to air that same year.

However, the series’ broadcast was delayed due to SARFT’s dissatisfaction with the story’s depiction of historical figures, such as military tactician Huo Qubing. The drama later changed its Chinese title, as well as some of its characters’ names, in order to appease SARFT. Nevertheless, so far The Song of Desert has not yet received the green light for an official release.

Recently, The Song of Desert unveiled the MV for its theme song, titled “Poem of Old Age.” The song’s lyrics come from a poem by Han Dynasty poetess Zhuo Wenjun (卓文君), who was widowed at a young age and later eloped with poet Sima Xiangru (司馬相如). However, Sima gained much recognition during the reign of Emperor Wu of Han, and he toyed with the idea of taking on a concubine. According to legend, Zhuo then wrote “Poem of Old Age” to condemn men for their fickle love.

The song “Poem of Old Age” is sung by Della Ding, who is known for performing drama soundtrack pieces. She previously lent her voice for the soundtracks of Bu Bu Jing Qing <步步驚情> and Prince of Lan Ling <蘭陵王>.

“The Song of Desert” Theme Song