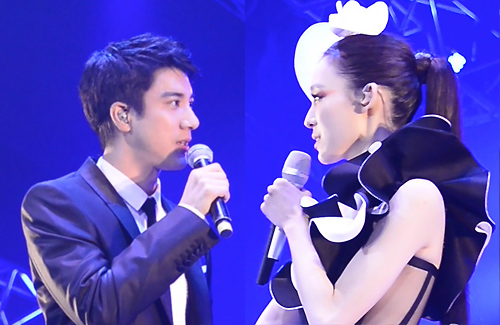 After a period of thirteen long years, American-born Taiwanese singer Christine Fan (范瑋琪) – better known as FanFan – finally held her first solo Taipei Dome-concert yesterday with a live musical band. Supported with the release of her tenth studio album Love & FanFan, which was released in March 2011, the Love & FanFan World Tour Concert stopped by cities Hong Kong, Beijing, Chengdu, and London, before arriving in the 40,000-seat Taipei Dome in Taipei, Taiwan on February 2, 2013. FanFan expressed that she will donate 12 percent of her concert earnings to charity.

Thirty-four songs were performed that night. One of the night’s most spectacular performances was when FanFan appeared on top of a three-floor stage, riding on a large pink elephant. FanFan explained, “When I was seventeen, I went to study in the United States. I was very lonely, and when I had nothing to do, I would sit in my room and daydream. One day I dreamt about a band, but all the band members were pink elephants. My first self-composed song was titled ‘Pink Elephant.’”

Many of FanFan’s close friends within the circle were guest performers at the long-awaited concert. Along with longtime friends Dee Hsu (徐熙娣), Pace Wu (吳佩慈), and Aya Liu (柳翰雅), the four girls sang FanFan’s hit single, “Not Able to Be Brave” <可不可以不勇敢>.

The comedienne Dee Hsu immediately told the screaming fans to shut it when the song began to play, exclaiming, “Stop yelling for now, let me concentrate on my singing!” The audience burst into laughter.

FanFan also invited good friend Mavis Fan (范曉萱), and together the duo performed FanFan’s “Good to Have You” <有你真好> and Mavis’ “Oxygen” <氧氣>.

Leehom Wang’s (王力宏) surprise segment in the concert also sent FanFan’s audience into fits of laughter. Leehom and FanFan sang a remix of their respective hit singles – “Forever Love” and “Black and White” – with the live band. “Black and White” is a song FanFan wrote for her husband, Charles Chen (陳建州) – better known as Blackie – which was recorded in FanFan’s sixth studio album Our Anniversary <我們的紀念日>.

FanFan and Blackie married in Taipei on May 7, 2011. The couple was together for ten years before getting engaged in 2010.

After Leehom and FanFan’s performance, Blackie immediately ran to the stage. Pointing a finger at Leehom, Blackie cried, “You aren’t even black! What right do you have to sing ‘Black and White’?”

Blackie then replied, “So this is what you like to joke about recently!” Blackie was referring to Leehom’s rumored “brokeback” relationship with Chinese pianist, Li Yundi (李雲迪).

FanFan may have caught Blackie and Leehom red-handed, but Blackie himself showed no signs of backing down. Expressing that he disproved FanFan and Leehom’s intimate interactions on stage during the duet, Blackie said, “By the way, my grandma is downstage. You should know that this atmosphere [you had with Leehom] is serious enough to get you punished by drowning in a pig’s cage in Hakka tradition?”

Leehom later interrupted FanFan and Blackie’s bickering and said to Blackie, “Do you need to ‘fix her’? How much do you need? I can help cover you guys!”

Laughing, Blackie responded, “You know I’m an athlete. Maybe I’ll be done with her after you finish performing your entire album!”

2 comments to Revealed at Christine Fan’s Concert: Leehom Wang is the “Third Person”