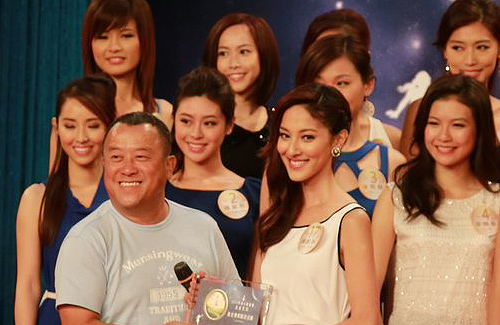 While the final preparations for the 2013 Miss Hong Kong pageant is currently underway, the 20 finalists attended the Tourism Ambassador Award ceremony at a sunflower garden in the Spratly Islands. The contestants wore colorful summer dresses and took turns presenting the details of their designated trips to the public. In the end, #17, Grace Chan (陳凱琳), who did her photography shoot in Paris, was the winner of the Tourism Ambassador Award.

The Tourism Ambassador Award title is actually Grace’s second award as she already won the Miss Media award earlier in the competition. In the past, the winners for the Tourism Ambassador are highly regarded throughout the competition and will have an increased chance of getting jobs in the future. When asked if Grace’s popularity will rise after this, she humbly responded that she is currently satisfied with her performance so far and will continue to work harder. Grace indicates that she does not expect to be placed in the top 3 due to tough competition, but she is confident that she will at least be in the top 10-finalist category.

Last year’s Tourism Ambassador, Roxanne Tong (湯洛雯), attended the ceremony and presented the award to Grace. Also donning a maxi summer dress, Roxanne appeared to have gained some weight after her participation in the pageant last year. She revealed that her personal picks for this year’s title are Virginia Lau (劉溫馨) and Grace because both possess lovely smiles.

When the press asked Virginia about the issue of sharing risky photos online, she answered that it is okay if it is a healthy type of sexy and she personally would not share her bikini photos.