The 2019 TVB Anniversary Awards was held on January 12, with Kenneth Ma (馬國明) winning Best Actor for his performance in Big White Duel <白色強人> and Kara Wai (惠英紅) scooping up Best Actress for The Defected <鐵探>. Although Kenneth has been nominated twelve times for the award and Kara has received countless acting accolades, it was the first time both artistes won the top acting awards at TVB.

Working at TVB for 20 years, Kenneth’s rise was slow and steady. In recent years, he has become a audience favorite with his affability on and off the screen. When his name was announced for the Best Actor win, Kenneth looked surprised. He said, “I’m quite shocked this year! First, thank you everyone for your support! Even if there isn’t an award, I’ve won already…. This year, there are many strong contenders, perhaps I’m lucky. It was my good luck to act in Big White Duel.” Kenneth’s colleagues and fans were happy that the 45-year-old actor finally got Best Actor recognition after years of hard work. 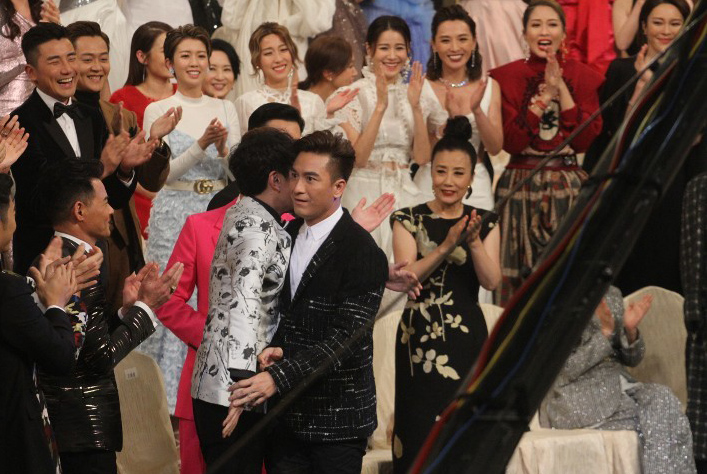 Stunning viewers with her powerhouse acting in The Defected, Kara Wai deservedly won her first TV Queen. Though she has already won Best Actress three times at the Hong Kong Film Awards, the 59-year-old veteran actress said humorously, “It turns out I was even more nervous [tonight] than at HKFA! I’m very happy and grateful to encountered such a great script although it’s been 10 years since my last Hong Kong drama. My career started at TVB…if viewers don’t mind, I’ll film more dramas. The dramas I’ve filmed have all been high quality.” 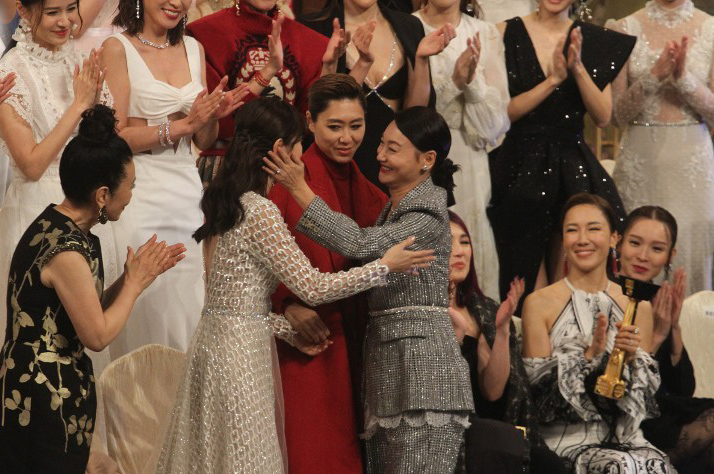 The Best Supporting Actor award went to Kalok Chow (周嘉洛) for his performance in Come Home Love: Lo and Behold <愛．回家之開心速遞>. Nominated for the first time, the fresh-faced actor was shocked by his own win. Similarly, Best Supporting Actress Candice Chiu (趙希洛) was another surprise winner for the night. The Barrack O’Karma <金宵大廈> actress thanked TVB executive Virginia Lok (樂易玲) and Mandy Wong (黃智雯) for their mentorship and guidance.

Pakho Chau (周柏豪) won the Most Popular Male Character award  and Most Popular Drama Theme Song for Wonder Women <多功能老婆>. Although he wasn’t feeling well tonight, Pakho was ecstatic over his double win. He said, “I’ve never had this feeling before, maybe it’s because I have a fever now. I want to thank everyone who has helped me over the last decade. Initially I didn’t have confidence in my role, but producer Chan Bo Wah (陳寶華) believed in me, so she deserves the most credit.” He also thanked his wife, Stephanie, for being an amazing wife. 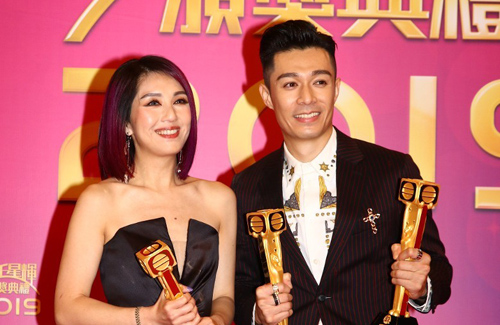 Selena Lee (李施嬅) and Miriam Yeung (楊千嬅) were the double winners for the Most Popular Female Character awards. Both actresses starred in popular dramas Barrack O’Karma and Wonder Women last year. Selena admitted this award was very hard to get, especially as she faced stiff competition this year, “I remember Roger Kwok（郭晉安）waited 18 years to win an award. At the time, I told myself I hope it wouldn’t take me that long. Finally, I got this award after 16 to 17 years in the industry.” Selena believes that her hard work has finally paid off, and her filming in Canada last year has strengthened her as an actress.

Thanking the team behind Wonder Women, Miriam was happy to come across such a good script. “This drama embodies the spirit of women. Filming this drama made me reflect the meaning of my own life, and the problems that a woman, mother, and wife can encounter.”