Aaron Kwok After Breakup: “I Have No Hate Or Resentment” 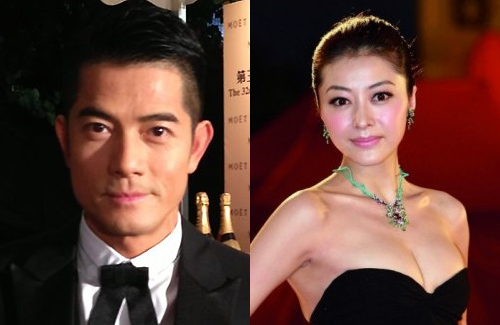 Aaron Kwok (郭富城) and Lynn Hung’s (熊黛林) breakup is now a reality, with Aaron speaking in the past tense about what had gone wrong in their relationship. Aaron said conclusively, “There’s no need to force things” and that he had “no regrets or resentment.”

Although Aaron and Lynn did not provide the actual reason for their breakup, they denied that it was due to a third party involvement. Tabloids claimed that Aaron was attracted to Christine Kuo (苟芸慧) and even introduced her to his friends, stirring Lynn’s jealousy. Yesterday, reports emerged that Lynn fell for a richer man and did not want to waste her time with Aaron, who did not want to get married.

At the Beijing International Film Festival today, Aaron was asked if Lynn had cheated in the relationship. Aaron answered, “Let’s talk about the movie [Conspirators 同謀] today okay?” But he added that rumors should not be trusted, “No one can be certain what had happened to the involved parties in a relationship.  Turning ears into eyes are wrong. There’s a reason for each person’s decision. I have no hate or resentment.”

Last year, Aaron temporarily split with Lynn after she pushed too hard for marriage, but they quickly reconciled. Aaron hinted that his relationship with Lynn is now beyond repair. “There is no need to force things. You can change your perspective to send blessings.”

Leaving for South Korea last Friday, Lynn returned to Hong Kong today. At the airport, Lynn appeared downcast when reporters rushed over. Asked how she was feeling after the breakup, Lynn pointed to her throat and did not answer. She coughed a few times and indicated that she had fallen sick while in South Korea. However, in her Weibo yesterday, Lynn had already denied rumors that she broke up with Aaron due to another wealthy man.

47 comments to Aaron Kwok After Breakup: “I Have No Hate Or Resentment”