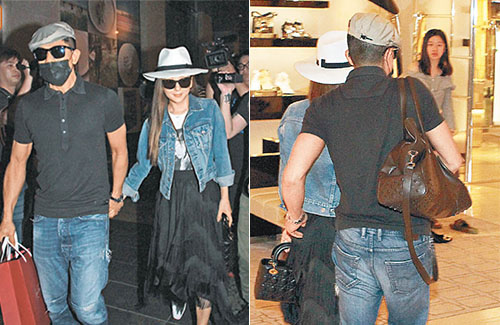 On Mother’s Day, newlyweds Aaron Kwok (郭富城) and Moka Fang (方媛) were spotted shopping in a mall together, marking it their first public appearance after tying the knot last month.

Moka, who is rumored to be pregnant, held Aaron’s hand as they went from store to store, looking for a Mother’s Day gift for Aaron’s mother.

The couple smiled at the paparazzi when they were approached. Aaron said they just purchased a bag for his mother. He refused to answer more questions about his family, but politely thanked the reporters for their concerns. After shopping for some shoes, they were approached by reporters again, all asking Aaron to comment on Moka’s home-cooked meals—the 29-year-old recently shared a photo of a meal she had whipped up at home, earning praises from netizens about her economical lifestyle.

“Wow, thanks!” said Aaron. “She’s still learning Cantonese, so she doesn’t understand what you guys are telling her.” (How’s her cooking?) “She’s good!”

As for Moka’s rumored pregnancy, Aaron said, “We’ll talk about it when it’s time.” Asking if Aaron’s on vacation for Mother’s Day, he said, “Yes. We’ve just finished a film, and coincidentally I get one day off, so I decided to come back [to Hong Kong] for Mother’s Day. We’ll be celebrating it tonight.”