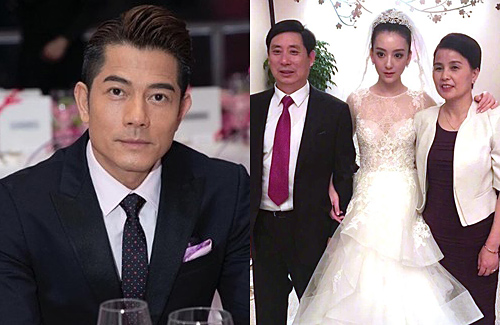 Aaron Kwok‘s (郭富城) mother passed away on January 7 at the age of 90 at home. The star planned to have the funeral today at the Hong Kong Funeral Homes, but wanted to make sure his wife Moka Fang‘s (方媛) parents can also attend the service. Several days ago, Aaron was seen trying to extend his in-laws’ stay in Hong Kong.

Aaron took his in-laws to the Immigration Department trying to see if it was possible to extend their stay in Hong Kong. If his in-laws renewed their application in China, Aaron was worried that they would have to self-quarantine themselves for 14 days due to the COVID-19, and would end up missing his mother’s funeral. Using that reason to apply for an extended stay, Aaron initially wanted the application to be approved immediately. However, this request was ultimately rejected by the immigration officer.

Not satisfied with the decision, Aaron was seen requesting to personally see a higher-level officer and some believed that the singer was trying to use his influence as a megastar to expedite the application process.

Responding to the allegations, Aaron’s manger, Siu Mei (小美), clarified that it was a normal application process. The sole reason for the visa extension was to enable his in-laws to attend the funeral. Siu Mei also revealed that the immigration officer was very nice, and the application was handled according to normal practices.