Adia Chan Once Turned Down Her Husband Because of His Age 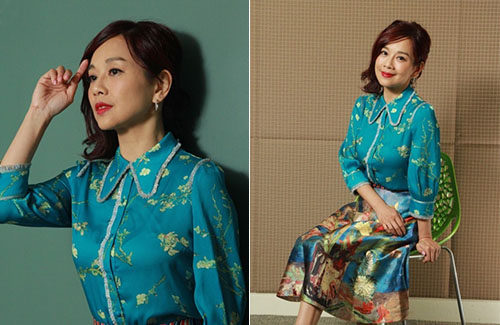 It’s been over 10 years since 46-year-old Adia Chan (陳松伶) last filmed a TVB drama. Adia’s comeback The No No Girl <全職沒女>, also her first collaboration with veteran actor Eddie Cheung (張兆輝), aired its final episode on Friday to ratings success.

“This is a breakthrough role,” said Adia. “I’ve never played a character like her before.” She said the captivating script was one of the reasons why she decided to come back. “The filming schedule wasn’t too tight, and I did have enough rest. This time, I worked with rookie actors such as Owen Cheung and Jeannie Man. They’re very diligent actors. We still keep in contact through a group chat.”

Adia, who married Chinese actor Zhang Duo (張鐸) in 2011, lives in Beijing with her husband. To film The No No Girl, Adia had to fly back to Hong Kong for a few months. To avoid the long distance, Adia and her husband promised each other that they cannot be separated for more than two weeks.

“Because of this drama, I had to spend a lot of money on plane tickets,” said Adia. “At one point I was worried that he’ll come visit me on set, because he’s very meticulous about my rest and eating schedules. Once the clock turns midnight he’ll say it’s time to go home. Time to sleep.” Although Zhang Duo is eight years younger than Adia, he takes care of her like a parent. “I feel like I have another dad now,” she said. “He’s not my husband. He’s my dad. If I don’t eat or sleep in time he’ll scold me. He’s very strict about it. Skincare as well. The first thing I see in the morning is him wearing his facial mask. I’m so much lazier than him! He is the one who has to remind me about my skincare!”

Adia admitted that she once turned Zhang Duo down after realizing his age. “But I’ve come to realize that he was very mature for his age. He’s a traditional man—very dutiful, responsible, and respectful to his elders. We’ve been together for almost ten years.”

The couple have started an entertainment company together in Mainland China, and expect to be busy with work for the next few years. They considered adopting children, but it was never their priority.

TAGS: Adia Chan, The No No Girl, Zhang Duo