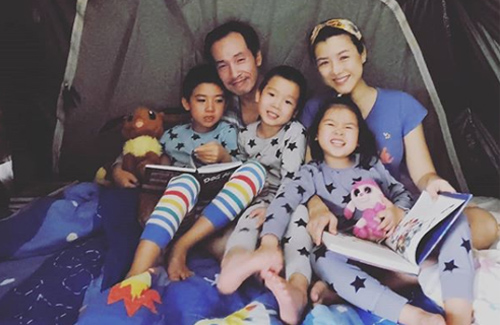 Having grown up overseas, celebrity couple Aimee Chan (陳茵媺) and Moses Chan (陳豪) exercise a more laidback, westernized parenting style that favors giving their kids more freedom and encouraging them to develop their own personalities.

Sought Out the Outdoors

During COVID-19, the Chans had stayed at home most of the time, only once did they bring their children Aiden, Nathan, and Camilla out to a nearby mountain near their South Bay residence for a little fresh air, while giving them an outdoor education on different species of worms and plants. Recently, the family went to a beach nearby and watched as their kids jumped freely into the sea with their floats.

Not wanting to be a “Tiger Mom,” Aimee tries her best to let her kids explore the world on their own terms to train up their confidence. It seems that Aimee has been successful in raising three independent yet good-natured kids.

Enjoying taking her kids out and giving them new experiences, Aimee brought Nathan to Repulse Bay for tea after picking him up from school one day. Ordering two sets of all-day breakfasts to share, she was dividing the food into portions when the playful Nathan stuffed a lemon slice into his mouth; and his face scrunched up immediately due to the sour notes. Pretending not to notice her son’s cheekiness, Aimee secretly giggled through her mask. Noticing reporters around, Aimee told Nathan to say hi to the camera, but he was so shy that he hid under the table immediately after waving. After that, the two went to a supermarket to get some fruits, during which Nathan stuck close to mommy like a koala. 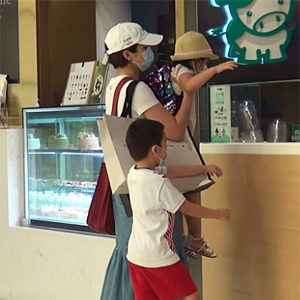 On another occasion four days later, Aimee brought Nathan and Camilla along to shop at IFC mall. When she was picking out shoes, Nathan started doing leg lifts on the sofa out of boredom while his sister waited for mommy patiently. Instead of raising her voice, Aimee remained calm and knowingly brought them to a yogurt kiosk for treats. Nathan pranced excitedly, while Camilla tiptoed in anticipation as mommy lifted her brother up for a closer look at the flavors. Aimee then pacified her daughter with a sample cup of yogurt which Camilla enjoyed happily.

10 comments to Aimee Chan is an Easygoing Mom