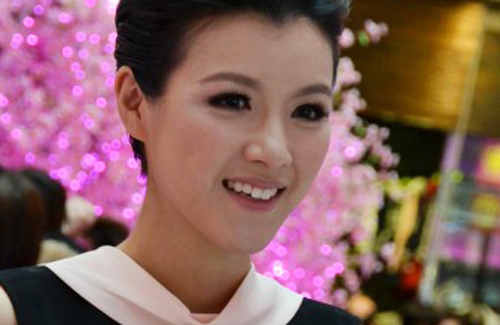 Since Aimee Chan (陳茵媺) and Moses Chan (陳豪) became parents shortly after they got married, they did not have a chance to go on a honeymoon. But the birth of Aiden Joshua in January gave Aimee extreme joy and made her feel as if she is on a honeymoon every day.

Although Aimee is still in the midst of doing her post-pregnancy confinement, she stepped out several times to promote for Outbound Love <單戀雙城>. When Aimee was filming Outbound Love, she was already pregnant with Aiden. She said, “This was the first series the baby accompanied me on. I will keep the DVD as a memento. He was in my belly when I was in Malaysia every day and we savored the Malaysian delicacies together. He also accompanied me while I was working.”

In Outbound Love, Aimee was wooed by Ruco Chan (陳展鵬), Tony Hung (洪永城) and Matt Yeung (楊明). Eventually she chose Ruco. Aimee said that the love story in the series is very realistic, “You may think he is the one, but he may not turn out to be your soulmate. I never expected to marry Moses. I never expected to meet my soulmate so soon. I feel very blessed now!”

Since Moses calls her endearingly, “My Queen”, Aimee naturally acknowledges Moses as her King and their son the little prince.

Like many mothers before her, Aimee feels motherhood in itself is extremely rewarding even though it may be hard work. “Sometimes, when I look at him, it is as though he wants to talk. Once I was so tired while breastfeeding him that I yawned. Baby immediately gave me a reaction. Actually when I smile, baby will smile. It’s a very good feeling.” While Aimee hopes to be able to get back to work soon once the baby is older, she also hopes to savor his babyhood. Aimee has taken herself to be Aiden’s personal photographer and will take photos of him every day to keep track of his growing stage.

Although it has only been a month since Aimee gave birth, she has already regained back her figure. Aimee credits her usual diet of light food and looking after the baby as her weight-loss secrets.

79 comments to Aimee Chan Was Pregnant While Filming “Outbound Love”