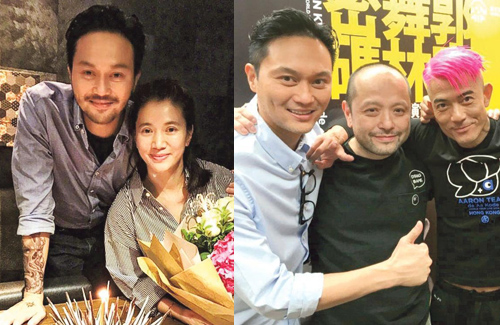 Possessing an outspoken personality, Anita has previously angered her friends with her blunt words, including Jackie Chan (成龍) and director Wong Jing (王晶). Both Leslie Cheung (張國榮) and Anita Mui (梅艷芳) had lectured her on her attitude, hoping that she will become more aware of what she said to others. Over the years, Anita learned her lesson but still requires Chilam to physically hold her back once in awhile so she does not say something she will regret.

When they first started dating, Anita’s had more career success than Chilam did, which often resulted in negative speculation that their relationship would not last. Over the years, Chilam continued to work hard and became a household name. This allowed Anita to scale back on her career to spend more time with their son, Morton. After 16 years of marriage, the couple is still very loving and Anita is glad she chose the right man.

Not afraid to make jokes about her husband and his friends, Anita called Chilam and his Mahjong buddies Aaron Kwok (郭富城) and Shum Kar Wai (沈嘉偉) useless. The men have been friends for over two decades. When asked why she made the joke, Anita laughed, “Because they become useless when they play. For example, when I asked him why he was going to play Mahjong today, Chilam said, ‘Because Aaron is leaving tomorrow!” A few days later, Chilam would tell me he is going again and his reason would be ‘Because Aaron’s back!’ Doesn’t that sound stupid?”

Despite poking fun at Chilam and their get togethers, Anita said he is free to play Mahjong as long as he knows when to come home. Anita said they have all worked hard over the years and it is reasonable they would waste some time playing Mahjong.