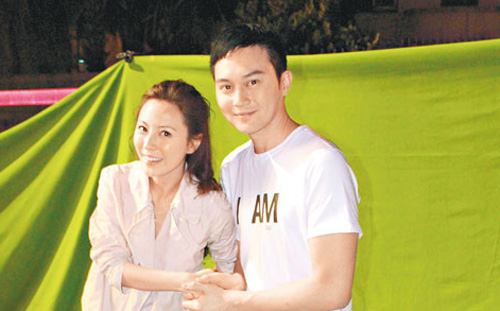 Prior to filming a tearful argument scene with Chilam in Natural Born Lovers, Annie sat in a corner to build up her emotions for the scene. Although she appeared to be sad when initially approached, Annie’s expression became happier upon the mention of rumored romantic flame, Kevin Cheng. At first, Annie denied any possibility of further development with her former Bu Bu Jing Xin <步步惊心> costar. Annie stated, “Entertainment news is meant to make people laugh. Currently, there is no chance for advancement opportunities. I do not wish to give people the impression that there is a chance; this will depend on fate.” Annie amended her comment, “It all depends on fate. The most important thing is to have feelings in a love relationship. It does not matter whether the person works inside or outside the entertainment circle.”

Professing that she was single earlier and was not in a rush to get married, Annie noted that she was not afraid that her rumors with Kevin will scare away potential suitors.

The filming of Natural Born Lovers was drawing to a close. The movie’s financier, Stephen Siu (蕭定一), brought bottles of champagne when visiting the set yesterday. Annie got along very well with the cast and crew and thanked everyone for taking care of her.

Chilam indicated that he had only one more day of filming before completing the shooting requirements for Natural Born Lovers. At an earlier barbecue gathering with overseas fans coming from Thailand, Beijing, and Shanghai, Chilam came across Eric Tsang (曾志偉) and Michael Miu (苗僑偉) playing ball. Chilam praised his fans for preparing many snacks at the gathering.

Jayne: Annie’s statement is similar to her initial response when asked about rumors with Kevin Cheng. I’ll like to see what Kevin has to say down the road.