While promoting their new drama Stealing Seconds <棟仁的時光>, Benjamin Yuen and Natalie Tong kissed on the lips. In the supernatural romantic comedy, Benjamin has the power to stop time and steal others’ time by kissing them.

Benjamin said, “I kissed over 10 men, including Jazz Lam (林子善) and Hubert Wu (胡鴻鈞). I kissed them fully on the lips. I felt so embarrassed. Some of the men were new artiste trainees. I saw they looked frightened. It was harder than filming A Fist Within Four Walls <城寨英雄> for me.”

Ben Wong appears in the most number of TVB dramas this year, including  It’s Like This, Your Honor <是咁的法官閣下> and First Lady in a Dangerous City <危城first lady>. Praising that the content in It’s Like This, Your Honor is even more interesting than Raising the Bar <四個女仔三個bar>, Ben noted that legal dramas have a steady stream of viewers and is unafraid ratings will be affected even if it gets aired o the weekends.

Ben smiled, “I have to thank the company’s producers in casting me. Perhaps a lot of the characters [in this year’s dramas] were suitable for me.” Ben’s filming schedule is already lined up through the end of the year. 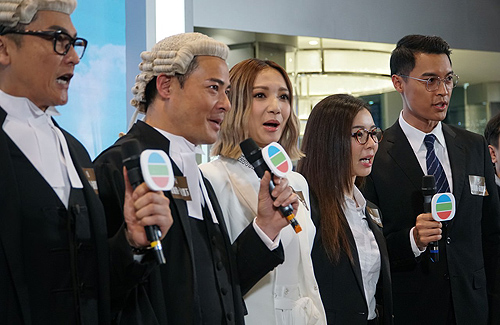